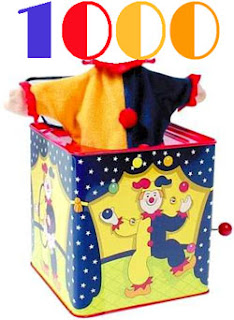 Yes! I have finally achieved something that's always eluded the rest of my family, 1000 posts on my blog!

I said this achievement was something that eluded my family, and that's true. As much as Grandpa did in his life -- serving in World War I, guiding his family through the Great Depression, sending off three sons to World War II -- he didn't even have a blog, let alone hack out 1000 posts. He died in the late 1970s.

And it's the same story for the others. Either they died before everyone got computers, or they were too old and begrizzled and already in nursing homes, or they weren't cognizant for some other reason of the value of sharing their opinions with a vast audience of complete strangers. Whatever the reason -- and it could be that I have cousins out there with assumed aliases writing up a storm, I just don't know -- they held back, leaving the field open to me. Then I flew under the radar with quite a bit of stealth, and here I am today!

But we all know, blogging isn't just something you do so you can brag about it as it somehow relates to your dead relatives from bygone generations. That's of course a big part of it, but it's not the whole story. If you're like me, whatever generation you're living in, you have a compulsion. Even if I were living in the days of the cavemen, and computers were hard to come by, I'd still be blogging by whatever name it went by. Like in the Flintstones. I'd have a typewriter with a couple of big birds pecking out the letters on a huge slab of rock. We'd set them by the side of the road, and passersby would stop and say, "Look, he's got 1000 rocks ... It's prehistoric!"

You get a compulsion, a few ideas, and you do it, that's all. If I'd've been in the world wars, I can see myself dissing the Axis powers in my posts. I might've shamed Hitler into surrender. Or if it was some other period in history -- just name one -- I can see myself, maybe with a big quill pen (a feather two foot long) and a bottle of ink, scribbling out something. Being around bottles of ink would be messy, of course. Remember hearing about Martin Luther throwing a bottle of ink at the devil? But if that's all you had, you wouldn't know any difference. (What I really miss from childhood are those little plastic ink cartridges we put in our pens. That was some smooth writing, although, again, they were messy.)

The problem with 1000 -- and I've been thinking about this for a couple weeks, so forgive me if I get a little teary-eyed -- is that it could be my best years are behind me. And the past has stretched out so far that it's not prologue anymore. It seems natural, doesn't it? Eventually the past isn't going to be prologue, eventually it's going to be epilogue. I might be bumping up against my natural ceiling here, folks. This might be about it. Maybe I was crackin' good at one time -- when I was young and hepped up on hormones. But now, it could be I'm getting too old to cut the mustard, as Grandma always said.

When you're old, of course you can still do a few things in life, at least go through the motions. I know I go through the motions quite a bit and it seems like the frequency's picking up. You get a mental block that stays around a little too long. You're dawdling on the sidewalk, even tottering, and all the neighborhood kids pass you by with their happy games. You find yourself window-shopping for caskets and checking out the sales. Triple X entertainment doesn't hold any thrills anymore. I'll be sitting there with a cup of coffee, lose myself in a revery, and 'wake up' and my coffee's cold. That's a terrible feeling -- Where was I? But it makes me feel a little better knowing cold coffee's now in style.

I'm going to try to continue on. It seems like if I'm conscious of the idea that this is as good as I'm ever going to be, that's still a positive enough mindset to work with. If somehow I can turn that into actual optimism, without being blind to the facts, then somehow I'll be able to keep going. Maybe someday they'll make a "Pluggers" cartoon about me, if I ever start dressing in heavy flannel and one of those dorky hats.
Posted by dbkundalini at 3:26 AM