Clash Of The Titans -- Masturbananda Vs. Wadd 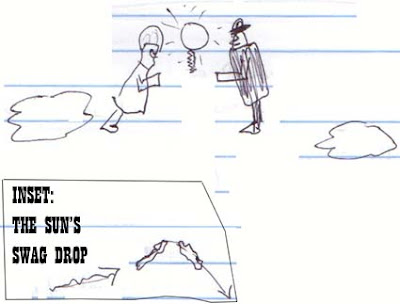 This is the record of an event that happened recently. It tells of the clash between titans, who also happen to be dread enemies. (To be fair, Swami Sri Masturbananda judges no man to be his enemy, but he's willing to put up his dukes if attacked. As for Pastor Wadd, he has lots of enemies and loves them all, but is willing to strike first if he feels he can advance righteousness.)

Each man stewed in his respective quarters in such a way that each was "het up" with their own particular mix of energies. Masturbananda found his power in the divine consciousness, reaching near his bag of tricks for a handful of awareness, and in the process, blew off the roofs of five consecutive outhouses, arranged in a kind of Stonehenge way. Wadd retired to his quarters with the book, and in intense, sweaty meditation over the written word, sweaty in part because of the tight hair underpants he'd recently had woven by an old yak farmer's wife. He looked up at the brim of his black hat and saw the lights of home, where God dwells.

The next step in the process was to channel into their system the energies of their respective devotees. For Masturbananda's part, he brought in the stored up virtue of his chelas (students) that had been released through their devotions. Not a single one could blow the roof off an outhouse, that was true, or even really budge from its moorings a ceiling fan, but Masturbananda knew their hearts, that they were good. He drew in his breath, and along with the power of his students' devotions, pulled it up the interior of his spine to the Sahashrara, the crown of creation (and more).

As to Pastor Wadd, being a sexual addiction counselor, sexual addiction being loosely defined as anything stimulative of the generative faculties except in limited instances of the procreative drive, as in a conscious decision not to allow the human species to become extinct, he reached out mentally and channeled his counselees' many repressed energies, coupled with the grimness of their regrets.

Then they came together over the skies of India, ascending each one to a place of prominence in the heavens.

Wadd began the proceedings, sending powerful volts toward Masturbananda's crotch. But the swami, even in the face of such power, had no difficulty because his chakras defended him, with a loud metallic slamming lockdown noise being audible from the ground.

Masturbananda, striking second, sent powerful volts of his own toward the sun's swag drop, with huge fireballs descending, meant to fry Wadd's brain. In response, Wadd pulled out a big mirror and, upon reflection, staggered Masturbananda. The swami, feeling himself weakened from the top of his head to a region near the navel, and from the feet up to his groin, thrust his hips and sent super volts toward Wadd's own crotch. The thrusting alone brought Masturbananda renewed energy, but the volts took away Wadd's power, burning a hole in his black pants; the smell of burnt yak fur filled the air. He apparently wasn't cognizant enough of that area of his body to defend it.

Masturbananda pulled back on the power, having made his point, and being merciful. Wadd's condition wasn't good, but perhaps he learned something. All his sensations from the neck down were neutralized, to make the point that he had emphasized the head and neglected the rest of the body. Of course Wadd could never get it. He thrashed around in midair, shaking his head, denying culpability, and covering the exposed area. With that, the pastor retreated, hoping to save himself and perhaps fight another day. We saw him disappearing over the horizon somewhere.

Swami Sri Masturbananda descended to his chelas' delight, teaching them later in a grand symposium to continue the techniques, and let no man tell you different!
Posted by dbkundalini at 8:59 AM