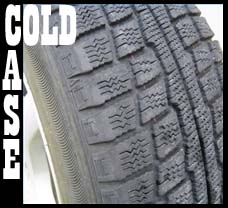 I have another case that has presented itself, and I'm proudly including it in my Cold Case file, something to look at and perhaps solve.

Right up front, I need to stress that the evidence is slim on this one. We don't know the make or model of the vehicle involved, nor do we know the exact date, nor do we have the slightest clue as to who was driving it.

I don't usually ask for help from the public, because I'm usually able to put together a pretty strong investigation with very few clues, but in this case I'm making an exception. Please -- and let me stress that, please, if you have any information as to the identity and whereabouts of the driver in this incidence, let me know. If I can get those particulars, I'm sure it will put me pretty far ahead as to tying up any of the other loose ends.

I'm pretty sure this incident happened in 1970, and it seems like it was the fall. That means it's getting away from us somewhat, and will continue to do so the more time passes unless we can get the facts nailed down. At this point, again, not knowing the identities, etc., it could very well be that those involved are deceased, etc. But I feel it's an important enough matter that I can't let something like that stop me. It's driven me crazy all these years -- decades -- and I'd like to finally be able to put it to rest. A special note to my surviving relatives: If I should die before this is solved, please pick up the scent and follow the trail; the answers have to be out there somewhere.

The incident, the facts as I recall them are:

I was driving a car and had a female passenger, a high school friend. We were driving around the town here, when it suddenly became clear that we were being followed. It was another car, if memory serves, and it had several people in it, estimated between three and six. A driver was in the driver's seat, driving. It appeared that he was male. We proceeded on our way, not being able to ID anyone. We drove up and down several streets. They followed us maybe 20 minutes. Then I drove her to her home and we pulled in the alley/driveway and parked next to her house. The vehicle behind us continued on, speeding up the road to the north. I don't remember the make or model.

Admittedly, this isn't much to go on. And the pursuit for facts is hampered by the reality that they didn't have video cameras on every building and post back then. And even if there had been a videotape, it's likely someone would have lost it by now. Because I had videotapes in the '90s and '00s that I can't find now, mostly because they've been thrown away or donated to Goodwill. And we're talking about 1970, when video would've been on open reels, wasn't readily accessible, and in fact wasn't used for videotaping random cars, especially at night. Did I mention it was night?

The thing that's driven me crazy all these years is, Who were these guys? What did they want? With the relevance being, 1) To satisfy my curiosity, and, 2) To know if they're harassing other people yet today.

But how am I to solve the case without something to go on? That's a huge issue. Still, I'm not ready to give up!

I'm thinking my best bet might be to return to the neighborhood where the girl lived and to look around for tire marks matching 1970 and earlier model tires. If I can put together a list of tires available, then get a list from tire dealers as to who they sold tires to at the time, I might be able to narrow it down. Of course then I will have to contact everyone living from the high school, as to the model of tires they had back then. Factoring in that most people don't keep this kind of information on the tip of their tongue, I'll also ask them if they were the ones following us that night.

Like I said, that's my best bet. But there's surely other evidence still out there. I believe that everything is recorded somewhere in the Akashic and Karmic records, the difficult trick being to gain access to them. Barring that, I don't know what I'll do. Although there could be some benefit in going to the police department and asking them if they knew of any habitual followers in 1970. That would probably yield something. And I could also interview any survivors, people who lived on the streets we drove down ... but I don't remember what they were precisely. I could contact the girl passenger as well, but she didn't know at the time who the guys were, or so she said.

Lastly, and I don't know why I didn't mention this first, I could have myself hypnotized, because maybe from my subconscious I could help make a sketch of the shadowy driver, then match it up with yearbook photos.

Anyway, they don't call them cold cases for nothing. And this one is getting colder all the time. My job -- my passion -- is to make sure it's solved before it's unsolvable.