I've Got An Itch Right Here 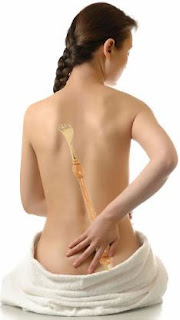 I'm bugged about itching and scratching. There's way too much of it.

Just thinking about itching makes me itch, and I've heard others say that too. I have some thoughts about localized and universalized phenomena. When it comes to itching, for me it's localized. There doesn't seem to be a general field of itching. I don't feel other people's itch. Still, just like yawning, if I saw others scratching like crazy, I'd probably start itching too.

One itch I've had for years is itching in the ears. That's very annoying. The ears have a nasty construction, being open yet you're not supposed to mess with them. But how can you not? It looks weird to be scratching your ears in public, but we don't associate them with erogenous zones, so no one thinks anything more about you scratching than how weird it looks. The appearance of an ear itch, for me, is immediate. There's no arc to its appearance. It's just there ... 100 mph.

Then we all know about scalp itch. I haven't got much more to say about it, except it's well addressed by consumer products. I'm thinking about shampoos.

Then, more embarrassing, there's the region where everyone's action takes place. Why that would be itching all the time, I could make some guesses. For one, there's too many folds and creases, and too much rubbing together. Nothing's really nailed down in a permanent place. It might be left, right, center, up, down, big, little, tight, or loose. Then with some exertion, you get perspiration, and it all interacts in a negative way. And it builds on itself, with perspiration accumulating in the surrounding garments, and next, dirt, various leakages and minor soiling from an inability to meticulously clean oneself.

All the nasty regions are so concentrated in that one area, in my opinion, there's no better place in the universe where the conditions are so right for the spontaneous generation of new strains of harmful bacteria. We try to blame it on African monkeys, but I'm not so sure. If you have an itch, you need to get it checked out. And if you happen to scratch, please clean under your fingernails before you shake my hand. The only positive thing about crotch itch is you can reach it in an emergency. The same thing goes for the ear.

The itch that has the worst placement is in the middle of the back. Normal length arms aren't long enough to reach it. So you're left seeking out a pasta stirrer, or getting someone to help you (left, right, up down), or buying a professional backscratcher. For me, the downside to a backscratcher is that it makes it itch again within seconds. So it's best not to scratch your back too well, just touch it enough to take care of the immediate problem. Touch a tree but don't rub too hard.

It's strange, speaking of bacteria, why we don't get itches in our internal organs. But thank God we don't, because they'd be really tough to scratch.