Why My Blog Doesn't Get That Much Traffic 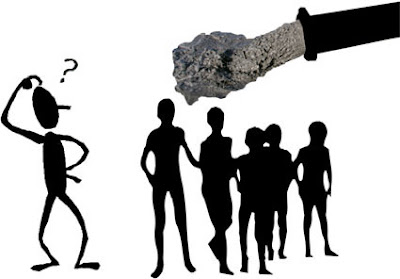 I've been doing this -- writing this blog -- for a long time. Like other things in my life, I've stuck it out when others didn't think I had much to give. And as far as I'm concerned, I believe I have something to show for it, even if it's only something I enjoy by myself.

Yes, welcome to the tough slog of the blog, where, if you're good, you can labor in the trenches, fight it out in the fields, and even take the fight to the enemy in the skies over India, and the crowds of the world are off looking at something else. Usually sludge. They're drawn to it, as documented in the illustration. (That's supposed to be sludge, even though it looks like an upside down phallic Cheeto.)

Looking back, I guess I can pretty well pinpoint when the decline started. I took a hiatus of a few months, I think it was in the first half of 2009. That's when everything went downhill. But for a while there, wow, it was great. I was able to reshingle the house with the money I made from Google Ads! I had a ton of followers! But now I haven't heard from them for a while. I had the blog, I had a printed newsletter on the side, and I was even sponsoring some real life visits with readers, etc. It was a wild time.

I'll look back ... Here's a link where I was feeling a little brought down by the way my readers abandoned me. That was a sad post, "The Hiatus Persecution Complex," in which I wrote:

Of course all of this only stiffened my resistance to calls that I end my hiatus. It's the oldest truth in the book: "The persistence of resistance is equal to the insistence of existence." It's quite literally an existential crisis when you see it in those terms: The enemies insist on the existence of my blog, probably my newsletter, probably the real life meetings. But when they insist, I resist, and therefore my hiatus persists. And not only that, but whenever words rhyme so well and tell the actual truth of the matter, you can't help thinking there's some divine inspiration at play.

Divine inspiration at play! Ah yes, maybe there was divine inspiration, but you know, sometimes the divine leads his loved one through the wilderness, taking away his hat, coat, tie, and leaves him for dead without bread and water. I can look back and attest, It hasn't been easy. Leading me to ask, Where are the readers? Where are the stinking readers!?

I know they're out there. I know my blog is accessible all over the world. I myself have gone to random places and typed it in. It comes up every time. And I've seen where the few readers I have come from. There's a few in South Korea, India, Australia, and a bunch of other little countries. There's even a few in Russia! That's wild. I was brought up with the idea that Russians are barely human like us. Until I was 15, I never slept in my bed, I slept under it, thanks to the Russians. And now I have a handful of them reading my blog! Still, it's just a handful, not enough to bring down communism, so what's the use?

Friends, I'm left with more questions than answers on what exactly the problem is. But I've come up with a list of things to help rationalize for myself what's going on, why my blog doesn't get that much traffic:

-- I refuse to cater to the fashions of the day. People are very fashion-conscious. If you're not "with it" they're not "with you."

-- I keep it strictly clean, nothing blue allowed. Any mention of orifices and protuberances is strictly verboten. I'm the Fuhrer when it comes to smut talk. Naturally, there's little reward in this policy.

-- I keep my temper in check, not lashing out at my enemies. On the internet, there's little tolerance for this policy, because virtually everything that becomes popular is filled with invective. Especially religious discussions.

-- I'm not going for cheap belly laughs or anything rude. People like rude behavior, especially with the anonymity the internet brings. Nice guys finish last.

-- I've refused to buckle to the fashions of the day, loud trashy gossip and celebrity recipes.

-- I'm abiding by ever increasingly severe values while others have given up all moorings at the altar of relativism, usually with their legs spread apart and a change maker on their hips.

-- I've got a bad location, far from the blogging meccas of the coasts.

-- I've suffered from bad publicity. My publicist was a shyster and ran off with the money I gave him, what was left over from the reshingling.

-- Dark forces seem to be conspiring against me, whether out of spite or jealousy. Why would they be jealous? Probably because I'm able to consistently write quality posts whereas the others are left to plagiarize each other's works or they write like blind monkeys at broken typewriters.

-- Then there's a lot of people who act like they're too good for me. Which is odd because I have the same feeling about them. They couldn't scrape dog crap off my shoe in a way that I'd appreciate.

-- Finally, there's the vast subset of internet users -- 90% or more -- who never advance past their homepage. They're stuck toggling between their homepage and Solitaire. That's how stupid they are, so of course they're not going to find my blog.

So today I'm wishing a happy anniversary to myself -- 999 going on 1,000 -- and giving a tip of the hat to all the other blogs of the world, which, in my opinion, emit nothing but raw sewage. It's ridiculous.
Posted by dbkundalini at 7:10 AM