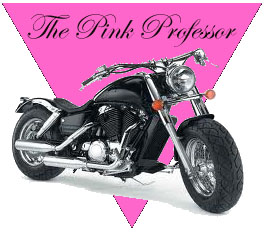 What do people go to a bikers' bar for? There's the obvious; you see bikers pulling in en masse, slapping each other on the back, rolling cigarettes, and going in to drink. Drinking and cameraderie's obviously the thing.

But then what difference is there if you add a Pink Professor character to the mix? A Lord Fauntleroy kind of guy, but an adult, who unabashedly nurtures an effeminate intellectual character in the midst of so much roughness. Who becomes accepted over the years, a trustworthy person, nonjudgmental, and familiar.

Personally, I think a Pink Professor could be accepted very rapidly, within a couple weeks even. Because familiarity is established quickly, especially if he's there a few times when everyone else arrives. The more they see you sitting there, acting comfortably, sipping your wine, the less strange it is. And if you have a kind smile and a caring attitude, you've got it made.

I think bikers are looking for love, security, and stability just like anyone else. To me, it's obvious they're characters with a real drive for tradition and ritual. Just look at all the flags and souvenirs from Sturgis they have, the Harley Davidson hats, shirts, and so forth. They're no different than anyone else.

If I'm a Pink Professor, let's say, I'm going to be one of the gang within two weeks, guaranteed. And I dare say, it's happen especially if I kept up the flamboyance and affectations. After the initial shock, that's something they'd appreciate, someone distinctive, perhaps an outcast in other circles but welcome here.

If I could be that guy -- I'm just daydreaming, I'm not going to spend my life as a Pink Professor in a bikers' bar -- I could see myself setting up debates within the facility on various topics. Or a symposium, like on what I said above, the appreciation of tradition and ritual. That'd blow their minds ... and the short story is they'd love you that much more, because you've embraced what's important to them as an honored discipline.

As for the debates, maybe they'd have disagreements -- I'm sure they would. And we assume they'd want to resolve it by shivs and chains, guns and fisticuffs. But what if we could debate the various issues of biker life? The Pink Professor wouldn't want to "lay a heavy trip" on them or anything. He'd start it out as just an informal "bull session" over by the dancers' stage, three or four guys. Then someone else comes over, noticing the Pink Professor's calm, non-threatening, interested demeanor. And before you know it, they're resolving things through debate and consensus.

I really do believe that bikers are softies at heart. I spent some time once with a guy from the Hell's Angels (true story). He and I were traveling on the interstate out in California in the '70s, and he confessed to me that he couldn't read. So I was a Pink Professor kind of guy to him, helping him with the road signs, etc. We stopped at a grocery store and I was able to read to him the labels on packages. I remember pointing out to him which was the turkey meat and which was the ham. When we parted, I wondered how the guy was able to find his way on roads before me, and how he was able to pick out meat. My conclusion was that he so appreciated my accepting Pink Professor-like attitude toward him that he allowed me to help him with something he already knew how to do. (This paragraph -- you might not believe it -- is 100% true and actually happened.)

I've met bikers since then as well, here and there. Of course a lot of them are getting to be old-timers now, and you figure they've got the natural mellowing of age. But even back then, if you treated them with respect, they were very friendly.

A great Pink Professor debate might be on the issue of "Whether our best days are behind us," that sort of thing. That's an issue that would resonate with me in a debate ... or at least a good discussion. I'm planning for my upcoming 1000th Grandma Slump posting to be something like that, whether I'm as good as I'll ever be.

And so, beloved friends of the bikers' bar, this is the Pink Professor wishing you all a good night. Just let me say to you fellas, you'll feel better if you don't drink too much and if you get a good night's sleep. But why am I telling you that? You already know it's true!
Posted by dbkundalini at 4:51 PM