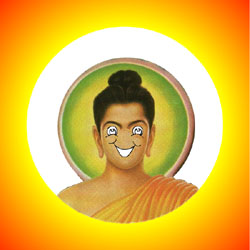 Swami Sri Masturbananda has a very wonderful teaching, that also guides his thinking, that we're all starstuff and we ought not forget it.

I like that word, starstuff. I know it goes back to the old days, like the '70s, I think. But in fact it goes back to the very first orgasm, the Big Bang, just prior to which everything was very stoved up. Then there was some manipulation with a black hole or something, and next thing you knew everything blew into being and happiness.

I also like -- I love -- hearing the scientists talk about this stuff on TV, especially the Science Channel. If they could just get rid of some of their hideous commercials -- Mantracker promos, Pumpkin Chunkin', Progressive, Geiko, etc. -- it would be a TV paradise. Especially when they're showing close-ups of planets, stars, galaxies, moons, comets, and big phallic things hanging from the sun and swaying hypnotically back and forth. It does something for your mental well-being to realize you're part of all that, not as a kind of foreign appendage, but as an intricate part, not exactly derivative but essential in its being.

Of course we wouldn't be "at home" on a planet that's 5000 degrees. We're "at home" on this planet, with everything else being out there at an appropriate distance. We can look but not necessarily touch. It's like a cosmic go-go club. The stuff out there has its place, we have ours. It's all energy and magnificent.

The upshot of all this is that in spirituality we're also right at home, spirituality being really only a focused awareness on what is and our part in it. That's where our guru, Swami Sri Masturbananda, comes in. Because, as in everything else, he leads the way in understanding and practice, being an avatar from the star stuff, sent (in the sense that he's here and it's nice to think he might've been sent).

What a master! To lead us into the glimpses of the higher consciousness, which really aren't so far from any one of us! With just a few well-ordered thoughts, we glimpse great things for five to 10 seconds at a time. We're thinking mostly of our experiences as men, although for women there is a corollary to what we're talking about, involving vibrators and probably some kind of lubricant and a naked picture of Burt Reynolds. Sri Masturbanda can be their avatar too. They just need to realize, as I'm sure they do, that he has a man's equipment, and they'll need to adjust the teachings to their circumstances as appropriate.

Sitting far away from Mother India as I am, I can only remember the master, and picture him in my mind as he would sometimes appear in the morning. I'm thinking of morning because really that's when the day really gets going. And that's what I like about it, that the day is officially underway when morning happens. I for one am up and at 'em, ready to go, ready to make the most of everyday. We look up at the sun -- star stuff, too -- and we love it!

Sri Masturbananda, as I so easily can recall, would be out in the morning. He would go for a walk by the Ganges. His chelas (students), at his direction, had put an outhouse for him in a vacant lot. The door was faced to the east, so the streaming sunlight could come through the little half moon window. It's hard to say precisely what he was doing in there, except I know as the sun became full, it was right at that moment when we would hear a shriek from within, and occasionally the roof would blow off and land fairly far afield, and after a few minutes a very content and apparently weakened Masturbananda would emerge, and the day was started in earnest. He'd leave, they'd hose it out and reattach the roof for the next day...

Like I said, I watch the Science Channel quite a bit. And you know, I don't know for sure, but I wouldn't doubt it if the master's the one keeping the sun going! Because who knows, maybe if the sun didn't see this happen, his outhouse exploding and all the rest, it'd just go back down and we'd be left in darkness. It's worth wondering about. But be that as it may, the sun does come up and it pleases the master immensely. And you know what? It's good for me too ... how about you?

Sri Masturbananda may be far away in Mother India. And we're here. But that doesn't mean we can't join him in this wonderful work. Whether it's an outhouse, or your own bed, or your bathroom, you too can greet the sun -- and maybe keep it up -- with your own personal morning celebration!

To conclude, I quote from the great Alice Cooper song, "Sun Arise":

Sun arise come every mornin'
Bringin' back the warmth to the ground.

Posted by dbkundalini at 7:36 PM