A WEEK ON THE TEACHINGS OF SRI MASTURBANANDA (4) 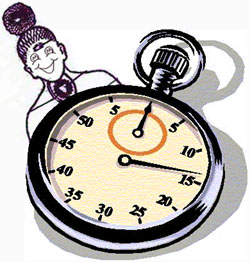 I'm going to be quick writing this first part, trying to get it typed in the time it takes for Swami Sri Masturbananda to achieve ecstasy in his meditations. I'm a fast thinker as well as a fast typist, but quite frankly I can't keep up with a jackhammer. The man is quick, scanning his memory and imagination for provoking fantasies that will, without fail, take him into those divine realms, the highest consciousness. He glimpses it for himself, and he leads the way for the rest of us.

[I failed. That took me a little over 60 seconds. I probably could've physically typed it in 60 seconds, but when you have to write it at the same time, that takes some time. But in that brief amount of time, the master would've been done and would've been cooling his hands in the lavatory.]


THE TIME HE COULDN'T DO IT IN 60 SECONDS

The story goes, at one time Sri Masturbananda was really down, weighed down by the sins of the world and, we believe, was working out in his own body the collective karma of all. Either that or it could've been a serious migraine.

To make a long story short, his meditation times also were going nowhere. He was scanning his fantasies, focusing in on the more lascivious aspects of the chakras and the whole bit, sweating it out in the bathroom. But then, after a few frustrating minutes, he was back out. Nothing! As a result, all nature seemed to be suffering, creeks driving up, then smaller rivers, then even the great Ganges River itself.

People along the banks of these waterways were grabbing the necklines of their clothes, suffering the stifling heat and other terrible effects of nature's despondency. They sent him many risque French postcards, the message imploring him to ignore the message and turn the thing over!

Teams of the master's chelas (students) presented him with lines of beauties brought in from around the country. The beauties paraded through his ashram, doing Charleston squats in the nude. But Sri Masturbananda waved them all off: "Away! It's no use!"

The suffering went on. Everyone was chewing his tongue from anguish. It was quite a sight, nothing good about it.

Then what? The Master came out of his ashram and walked along the dry banks of the Ganges. He looked like Job in a loincloth. The sun over him was enlarged, and hotter than anyone could stand.

But then ... this is great! ... Heaven itself intervened, sending a message of reassurance, signs in the clouds that everyone could behold, designed to stimulate the master. Giant shapes were being formed in the clouds, and they were crystal clear: Cleavage so big it was like your grandma's, only about half that age. An orgy of big-boned women and men was in full swing. These were the gods! The winds shifted left and right, jostling all these shapes back and forth. They were trading partners in a rousing session of hunka hunka burning love. All in all, it was a great sign, the smiling of the cosmos, announcing that the karmic debt had been paid!

Sri Masturbananda beheld the signs, then, at a trot, ran to his ashram and everyone knew where he was headed, the bathroom! All eyes watched the renewed swami disappearing through the door. Now there was nothing to see. They could only wait. But suddenly they heard the sound of a roaring fan. It was the vent over the bathroom! The fan was turning faster and faster, and finally it blew off the building and landed about a hundred yards away in a field.

From the vent then came such a mixture of steam and smoke, they couldn't tell which was which. The word went out: "Either we have a new pope -- or the old boy's back!"

Then the master appeared at the door, smiling like the sun itself. The vapor from his hands ascended, making rain clouds in the sky. Soon water began flowing down and the Ganges rose once again. Birds returned to their trees, unpacked their nests and sat up housekeeping once more.

Other interesting phenomena included the dead being raised and going back home. Antique stores had to return their possessions, to the relief of nervous survivors.

The 60 second man was back!

Everyone's karmic debt being covered by the master's substance, everyone lived happily ever after, every man a brother. And their women bore them young.
Posted by dbkundalini at 1:38 PM