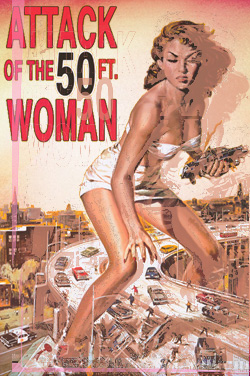 Ants, bugs, spiders, all of life's more terrifying creatures can have and have had their gigantic versions in the movies. They run amok so that we really notice them. Meaning, it stands to reason, that they're busy running amok on their own little scale all the time but no one cares.

The ants were doing a whole thing with an anthill out by the tree, and I went to mow the yard and noticed a mountain the size of a bushel basket. That's a lot of digging. Imagine what they'd do as giants. They'd roll over in their sleep and tip my house off the foundation.

Then there's the genre of the "Attack of the 50 Ft. Woman." Making me wonder what she'd do for company, were it not for spending all the time running amok. A 50 foot man? Another 50 foot woman. Or a 40 foot man? There's the Giant Wasp Woman, and at the other end, the Incredible Shrinking Man.

Which brings me to boob jobs. I personally wouldn't want to be packing around two gallons of silicon and don't see why anyone would. It's American gigantism run amok, or world gigantism, assuming everyone else is as infatuated with bigger and better like us. You ought to be happy with the ones you've got by nature.

Personally, I think small in things are OK. Wasn't that what we were going to years ago? Miniaturization. Small things are very important. As an example, small things can hurt like big things can't. The tip of a needle jabbed against your arm feels worse than the handle of a big hammer, like if it's just a jab. Even the tip of a toothpick sticking you in the chest, popping out of a T-shirt pocket, is pretty painful.

When it comes to smallness, it hurts because the thing has better access. There's not enough around the tip to block it out when it touches you. But big is still terrible, with destructive power, coming from its weight, like in a 16 ton anvil dropped on you. Your bones are crunched. Worse than 16 tons of marshmallows.

I'm not so sure American gigantism is such a big problem anymore. I read the other day that the era of the skyscraper is over with. (Orion magazine, July-Aug. 2011 issue.)

--------------------
*The title is a phrase from the "Introduction" by Kevin Baker, p. xii, preceding Bernard Malamud's "The Natural," Farrar, Straus and Giroux, 2003. If you want to write them and tell them I used the phrase, their address is 19 Union Square West, New York, 10003. I'd rather you didn't write to them, but what the hey. Thanks, Kevin. When I read an introduction in a book from 2003, I start thinking, he has no idea whether people are reading it or how many. There's nowhere to check his hits. He might be walking down the street, thinking to himself, "Here I am, a literary genius, and no one recognizes me." I personally read your introduction today and thought it was very good. It wasn't lengthy like some introductions, which discourage me when I see them, like half the book. Seriously, check out the introduction to "Kabir -- The Weaver's Songs," published by Penguin Books in India in 2003. We've got the introduction clocking in at 96 pages! Out of just over 300 pages. It was written by the translator, Vinay Dharwadker. Clearly a case of Indian gigantism run amok. But I frankly don't think you'd know that much about Kabir without a good sized introduction, although it gets extremely technical.
Posted by dbkundalini at 4:38 PM