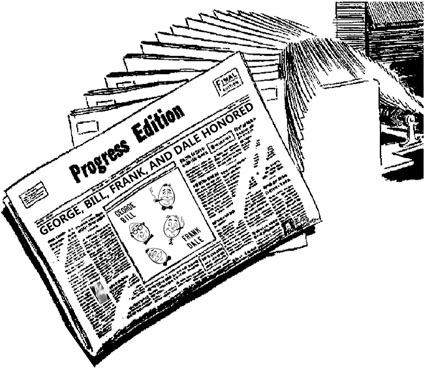 The purpose of a Progress Edition of a newspaper is to tout the achievements that have been made locally, while looking forward to greater things to come, and to lift up civic pride.

And so today it is in that spirit that we put forth the Progress Edition of this blog. We do it because we're proud of what has gone before, and we're optimistic for what is still to come. As your editor, of course I'm perhaps proudest of all, but I know that I couldn't do it day after day without you, my faithful and supportive readers.

One of our proudest achievements was as recent as yesterday, with the post on "George, Bill, Frank, and Dale." These were four fine men -- with Dale still a fine man as the only survivor of the four. While I didn't hear directly from George, Bill, and Frank's loved ones, I can only believe they were happy to read it. In Dale's case, I did hear from the nursing home that he raised his head and smiled, so I'll be getting a printout to him as soon as possible, and I'll probably have it framed, bronzed, laminated, and numbered.

That's just one achievement! But we've made progress on many fronts, presenting the best blog we can and putting it out there free of charge for one and all. And while so many other blogs -- mostly so-so blogs -- have shuttered and gone by the wayside, we have prospered, our traffic growing all the time, five here, 10 there. How do we do it? Mostly by word of mouth, and we thank you for all your links and retweets. But also by running compelling promos for our key demographic, everyone from 2 to 104.

As an example, here are the five promos I ran for the "George, Bill, Frank, and Dale" post: 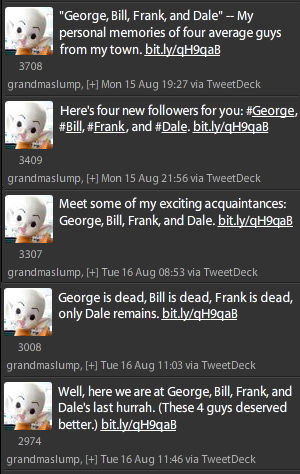 I feel the promos were well appreciated and effective, but for some unknown reason I lost 734 followers overnight, roughly an average of 180 after each one. So that's an interesting coincidence.

Other than the "George, Bill, Frank, and Dale" post, in the last week I presented a fearsome apocalyptic vision of the end of the world, mostly based on a dream I had of Mexican street children stealing my suitcase. That was called "Knee Deep In Dead Crows." I made real progress with my post on the latest in police technology, the pinging of cars, called "Don't Ping My Car, Bro." This is true, for my efforts there I was featured in a recent issue of Police Technology News, albeit it under the fold.

And of course this week hasn't been it. Earlier in the month, I had two posts on sex with a mule, "Sex With A Mule" and "Champion Jack Dupree -- Sex With A Mule 2." Which gives me a good opportunity here to express a heartfelt apology to the Dupree family. Yes, I got your note, and, no, I wasn't saying any of you were the illegitimate offspring of man/mule sex. As far as I know, you're all legitimate.

July was full of progress. That was the month I had the great post on going to bed with the Princess and the Pea and Sri Masturbananda and the Wood Manhood Affair. My memory isn't as good as it used to be, so I'm trying to remember what the Wood Manhood Affair was all about, but I'm sure it was something good. As to going to bed with the Princess, I can't forget that!

Just looking over the whole year, time prevents me from mentioning all the great progress we've made. But I would at the very least urge you to go back and look at my "Proceeding From The Pink Professor's Zipper." Because I seem to remember that was a pretty good one. At the very least, it has a heckuva title.

So progress has been steady at the Grandma Slump blog, and we will continue on, exorcizing our mental demons together and having a few laughs, maybe, hopefully.

In conclusion, let me honor them once again, because this could be the very last time they're ever publicly mentioned: "George, Bill, Frank, and Dale." I started writing a folk song about them, but I've only got the first few lines, and I know you can't hear the tune. But so far it goes like this:

It will go on from there, depending on if I get the inspiration to write more.
Posted by dbkundalini at 7:22 PM