The Devil's Lesson: Never Put Anything Off 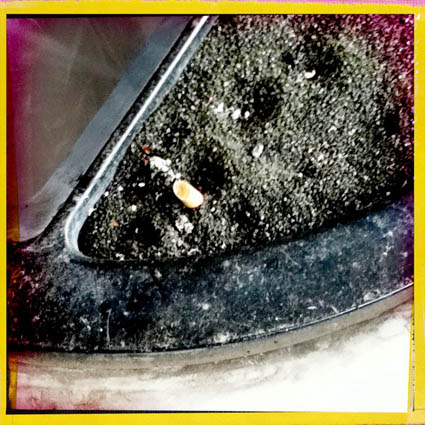 I probably shouldn't say, Never put anything off, because I have at least five tasks I could be doing right now. Except, of course, I can't do them all at the same time, so something's got to wait. I'll write this right now.

But you think some things are harmless enough to put off until later, until bitter experience jumps up to bite you on the ass and let you know, You should've done it when you had the chance!

Take this cigarette ashtray outside a major store, pictured above. I was there, sitting on the bench. I looked over at it and thought it'd make a nice picture, since it had about nine cigarette butts squashed in the sand. But, I'm thinking, there's no hurry ... they'll be there when I get around to it ... what's going to happen to them? ... maybe the sun will go down a little and they'll have a more artistic shadow, something evocative of loneliness, heartbreak, and being discarded, something to cheer me up.

I'm sitting there thinking about it, but it takes precious energy to get up and walk the one and a half steps to it, then I'll need to fire up the camera, and further strain my brain getting just the right angle. I'd just had a nap anyway and I was still feeling a little groggy. They'll be there, they're not going anywhere. It's not a cute kid with a rattle who's going to lay it down in five seconds.

Friends, I'm here to tell you, the devil is real. That's the only explanation that fits. The devil is real. And his main purpose in his infinitely sad and miserable existence is to screw with my head and make my life sadder. Oh yes, he dangles all the various temptations in front of my wondering eyes, but for the most part I've learned to say no to all that glitters, since in the long run it too will make my life miserable. But I'm thinking -- obviously -- there's very little percentage in the devil's favor to deny me an evocative picture, one stinking picture, of a bunch of squashed cigarette butts. But I was mistaken...

I'm sitting there, literally a step and a half from the disposal, when a guy, noiselessly, without a sound and without a glance or peep my way, rides up on a bike and proceeds to quickly take the butts out of the disposal one by one, until he's gotten eight or so, then puts them in his shirt pocket, and rides away.

I couldn't believe it. It sickened me, for obvious reasons. Smoking isn't good for you in the first place, let alone what you're likely to get out of a bunch of butts smoked by total strangers. But the really important reason why my stomach suddenly went sour, and replanted the seed of devil belief in my mind, coarsened by modern scientific knowledge against devil belief, was that I was deprived of the picture I had envisioned.

It stands against reason is a dozen different ways. But I'll just sketch out a few. 1) I've never sat on that bench before; 2) I've never contemplated getting a picture of that cigarette disposal before; 3) I've never seen someone ride a bike up and essentially empty one out; 4) The fact that it had to happen right that second, at that very instant, the very time that, within a few minutes, probably, I would have been taking the picture, boggles my mind. You think, No! The positive spin is it does once again grant me a place at the center of the universe, so maybe it's not such a bad tradeoff.

We've agreed it's totally against reason, that much is sure. And yet it happened just the way I described it! But perhaps oddest of all is this, the open question of why he left one butt behind!? That's what I have in the picture above, one cigarette butt! This guy removed them efficiently, one at a time, shamelessly, but then, against reason, left one behind. That's one of the questions killing me.

Could it be (and this is a serious question), could it be that someone so frugal as to be recycling used cigarette butts would also have the ethics to not take them all? This is serious business, something like Manifest Destiny. If you colonize and you take it all, that's one mindset. But if you somehow move in and coexist, that would be another. It would still be pretty bad if you moved in and took 90%, which is approximately how many butts the guy took. But if it's only used cigarette butts you're taking -- which are generally considered worthless -- and you leave nearly 10% for some other poor soul to come, that's a fairly decent ethic.

Or, think of this, what if he leaves one behind to prime the pump, so to speak, so smokers who follow won't think they're disturbing something pristine by leaving their butts? It would be the same principle of hanging a for sale sign and taking one of the phone number stubs yourself. If this is what his motive was, of course that's not as much a humanitarian move as would be leaving the last one for some other poor soul. But still, it's really good thinking!

The way I'm resolving this in my mind is this: It's a lesson to me to never ever again put anything off. If I see something worthy of my artistic photographic talent, get the picture now. And the other resolution to it is to know I have a dreadful enemy in the devil, and if there's any way for him to ruin my best laid plans, he will do it, so I must be continually vigilant.
Posted by dbkundalini at 4:47 PM