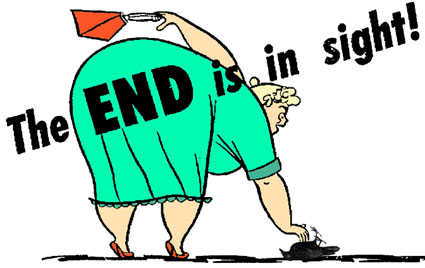 It can't be very long now. I can just feel it. I haven't got much else to go on. Except I've had some very bad dreams lately, with all kinds of grotesque imagery, stuff that ends up being more or less a swirl, with nothing very distinct or understandable. The other night, I clearly saw some Mexican street kids hustling my suitcase up a steep hill, headed for a car, and I'd only misplaced it for about 20 seconds. I tried to run up the hill, but my feet were like lead, and I knew that even if I caught them, it'd be too late.

It's all getting to me, the signs of the times. Congress in turmoil, the world economy roiling, famine, drought, starvation, Netflix more and more unreliable, earthquakes. I'm in great perplexity, knowing, or discerning, that we're very soon to wake up to headlines like "The End In Sight" and "The Grim Reaper Stalks By Day." That's what they'll be saying. It's soon, very soon, and we'll tune in to the 5 o'clock news -- it'll actually be a couple minutes before Jeopardy goes off, when they promo the local news -- and we'll hear, "The world officially at an end, temperatures in the lower 200s."

Then it will happen, with all that remains existing as the ultimate dystopia: Wounds and sores that won't heal, pustules popping out everywhere, magnified bacteria running the streets with machetes, people in misery, gnashing their teeth and seeking death, but it flees them, liquid waste flowing out of pipes, teenagers running from stores with TVs under their arms, and everyone everywhere knee deep in dead crows. Where did all the crows come from? Somewhere, obviously, a bunch of older crows were having sex like crazy to get ready.

Everything that can go wrong will. Murphy will rise from the dead and point his spindly finger at the world, like a prophet. Everything we hate to see we'll see in grim abundance. Skeletons will be dancing on the mountains, big bony skeletons, zero flesh, nothing inside, no explainable reason how they could possibly be dancing. The noonday sky will go dark, the midnight sky also. The moon will be huge, hitting our eye like a big pizza pie. Nursing homes will have the residents in the hall. Hospitals will run on emergency generators. Sports events will be cancelled, bringing an end to $9 beer.

But my dreams can also picture the substratum of society, the grimy underworld places, loving it. Because the police aren't on their tail. All those services -- police, fire, ambulances -- have come to an end. It's a free for all. Criminals are cleaning out banks, stockpiling tons of loot in their hideouts, oblivious to the folly of money in a world that no longer exists. For the hours or possibly days they have left, they're living it up to the fullest. It's mob rule, anything goes, complete craziness. They're even smoking in restaurants again, the truest sign of the end.

Where is government in this nightmare-scenario-become-real? The president and representatives of Congress are in a hidden, well-appointed cavern, trying to decide what can be done. But they're at loggerheads, the president of course preemptively compromising, while the Congress makes more and more insane demands, such as cutting off anything that might help anyone, at last denying funds for bottled water and tourniquets. The Republicans are happy everything is going to hell, they're just worried they won't live long enough to win the next election.

What do you suppose is happening with our computers during this time? For a short while, there's actually some positive signs. With so many programmers being dead, we're not bothered by constant updates and the need to reboot every 20 minutes -- opening iTunes is even momentarily enjoyable. But the downside is some kind of hellish virus, literally a virus, black corruption, suddenly spilling from our keyboards and all over our laps, ruining our desks, gumming up our mouse, paralyzing our legs, and killing us. The last Facebook updates include things like, "I'm missing someone who is in Heaven. He died five minutes ago. I'd give anything to talk to him again. Repost if you also miss someone."

The end is here, folks. And there's nothing you can do about it. It's going to be a plague-a-minute. Remember, crows are knee deep everywhere! And it's completely downhill from there. There's nowhere left to walk the dog.
Posted by dbkundalini at 9:01 PM