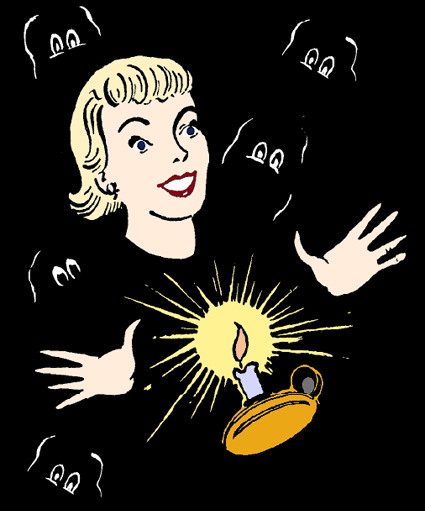 I'm going to get right to it: I hate all the ghost shows on TV.

The one put on by the former Roto-Rooter guys, if I'm not mistaken, was the first, and still appears to be the most humane. But it's still not good, since the respect for ghosts and their habitat is clearly way down the list. The one put on by the loudmouth guy who "never believed in ghosts until I came face to face with one" is the worst I've seen. We're trying to track down the ghost who came face to face with him and ask him next time to be more discriminating about who he meets. Then there's other ghost shows that I've only seen snippets of when passing through the room. They also suck.

The way it works on these shows: They're always seeking out someplace that's reported ghostly activities. Then they go in and set up for a night or so, and that's where the havoc begins. They're busy going room to room, with their night vision cameras, various sensors and apparatus, and their own feelings. They're always feeling a cold chill on their neck, or what have you. The loudmouth's show now even has some sort of speech synthesizer, a computer that interprets random noises as possible words, giving them the opportunity to "interview" a ghost based on a few squeaks of a rusty hinge. Make the door go back and forth and you might hear comments like, "Yes," "No," and "Leave us the f*** alone!" I'll let you guess which was the actual ghost talking.

Because to be left alone, that's it, that's really what the ghosts want. They don't find any joy in visitors just barging in uninvited and disturbing their peace. Especially after dark, which to them is their life. That's when they're up, trying to enjoy their lives. And they're not looking for company, for TV personalities to be recording (without permission) their activities or tracking their whereabouts. Imagine how you'd feel if a TV crew busted into your house and set up shop for a day or more, especially if they weren't paying you.

For these TV characters, it's all big money. In our 'anything for a buck' society, of course, anything goes. Even this kind of thing, as disturbing as it is. Tell me, when is the last time you saw anything like actual respect out of these people for the ghosts? It's a simple question, because you haven't. They're simply full of bluster, trying to take on the ghosts in an uncaring way. Watch how they're always casually inviting the ghosts to come and speak to them. Then as soon as there's the slightest unexplained noise, they freak out, yelling, "Did you hear that?!" Then when their fear subsides, they do it all over again.

The most revolting things I've seen are on the loudmouth's show, where he literally taunts the ghosts. He's bellowing at the top of his lungs, "You dirty son of a bitch, I'm not afraid of you, come out and show yourself and I'll kick your ass, you filthy ghost!" Seriously, folks, how can this be of any help to anyone? The guy needs a new line of work. Daycare teacher, lunchroom attendant, warden, anything.

I think the time has come -- actually it's way past time -- for us to rise up and start insisting that all these ghost habitats ought to be protected, if not through voluntarily curbing it, then by the law. Because these are very fragile ecosystems, and they shouldn't be callously disturbed. Yes, perhaps some legitimate, level-headed, respectful scientific exploration might still be allowed, seeking knowledge, mutual understanding, and harmony. But not these commercial, exploitative ventures.

I know, they're not always aware of the damage they're doing -- they obviously don't look at this as an environmental issue. So they think they can go in and cause all kinds of havoc and it's going to be all the same, a spiritual wash. Which is exactly where they're wrong. Instead, they're driving ghosts from habitats they've dwelt in for generations, and caused turmoil possibly at the highest levels. We don't know precisely how ghosts fit in the fabric of life. But certainly they indicate a lively existence beyond death, so that's something to respect.

You know what? I'll probably get in trouble for saying this, because I know it's going to show some aggressive tendencies on my part. And perish the thought that anyone do that! Well, I'm sorry. But I'd like to see these creeps and their bluster met head on. What I'm saying is, if I were a ghost, and maybe after I die I will do something like this, I would make these guys on TV sorry. And I mean over and over until they were gone.

If I were a ghost, I'd love to get those bastards on that loudmouth show alone in a haunted house, and -- I'm not going to say precisely what I'd do, except it would end with them strung up from the rafters by their nuts. Is that too harsh? I don't think so, because I'd let them down to relax for a few minutes, before stringing them up again, over and over, until they were ghosts like us. Nothing wrong there! They wanted to know about the ghosts, let them find out firsthand!

Or if I couldn't do all that at once, I'd make sure their cameras and things were completely destroyed. We've seen some of this on the shows, cameras that quit working, sensors that lose their sense. I'd say let's press our invisible advantage all the way and completely obliterate their equipment. Hey, they're screwing around with us and our habitat, let's get them for it! It's not like anyone can really do anything about it. OK, I'm angry, that is very clear. But who wouldn't be when we know what's going on?

Being driven out of your natural habitats, abandoned houses, old prisons, where are they expected to go? If they take up residence in other people's houses, peaceful coexistence is going to be difficult. And let's face it, it's hard for ghosts to maintain their habitats anyway, because someone always wants to tear down old buildings. Or how about this? Protect ghosts because someday we'll be ... ghosts!

The time has come for spiritual respect with a dose of spiritual environmentalism. Don't watch these ghost shows on TV. Please don't contribute to the destruction of ghost habitats.
Posted by dbkundalini at 3:39 PM