They Were Married By Telephone 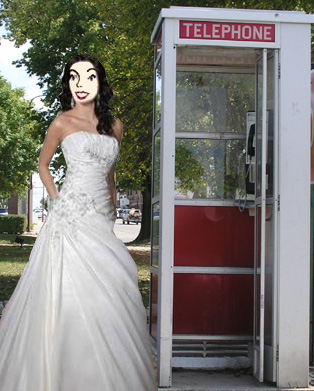 Here's one of the more unusual stories I've ever heard. And you might agree with me, that, "Now we've heard it all!" But according to the people who were there, every word of it is true.

It could be that you recognize the phone booth in the picture. It's one of the five booths like it left in the United States, with this one just so happening to be at Jefferson, Iowa, also home of Rhesus College. I was trying to find it on Google maps, but having never been there, it's tough to spot.

The weird thing is, all his life Rick said he would never attend a wedding. He made that decision when he was a kid and his parents were trying to get him to dress up to go to an aunt's wedding, one of his least favorite aunts.

Then, however, he met Cynthia, they fell in love, and one thing led to another, and the thought of getting married came up. He hemmed and hawed about how to do it. They thought maybe they could go to Vegas, but still he would have to physically be there for the ceremony, and that was what he wanted to avoid.

Did he love her? Yes, I must say, he loved her with all his heart. Although I personally don't know them, I know in my soul that this was a love for the ages. I was very touched as I watched them bloom and grow together, he from a small child with an aversion to weddings, and she a lovely girl with all the hopes and dreams that most girls have. Then they met, and those of us who were close at hand, I've heard, believed wedding bells one day would ring ... or perhaps not, given his strong feelings on the subject.

Could they? Might they? Would they ... live in sin? That is, to cohabitate without the benefit of the formalizing of vows? It's a dicey issue, as both have always been very devout and true to the doctrinal dictates of their church, having internalized a mile-long slate of rock-solid rules all the way to the core. To go against that was obviously out of the question, even in the face of his prior vow to never attend a wedding service and his burning love for Cynthia.

They thought it over, they weighed their options, they consulted all the better known wedding magazines, some of which run to 1,400 pages, for guidance, how to have a wedding without actually being there. But none of them covered the subject. Then, somehow -- it could have been when he was on the phone with her one night -- an idea came to him like a bolt of lightning from a blue sky, We could have it on the phone!

But what kind of phone? I won't get into all the back and forth on this decision, except to say, discussions ran the gamut, from the earliest hand crank phones in museums, to the rotary phones of the mid 20th century, to the cellphones of today. Then they backed up a bit and thought, how about a phone booth? But phone booths are just about gone ... bummer! But a little Google action on their keyboard, and Eureka! There's still five left in service, including this one in Jefferson, Iowa.

And so ... that's the way it turned out ... Cynthia standing there next to the phone booth, the best man on the receiver conveying Rick's responses to the minister's questions, and they lived happily ever after ... The End.

But that's not really the end, of course, since you could go on and on about who wore what, and so forth. Cynthia was lovely in a flowing gown of white. Being an old fashioned girl, she debated whether she should actually wear white, having been together with Rick many times. But, you know, it's tradition, it doesn't really matter if you're pure anymore. Rick was handsome -- what they could see of him -- upright and tall, metallic and silver, rectangular with red stripes, and a well-oiled door that didn't squeak when the best man attended to his needs.

After the wedding, all the kids tried to see how many of them could jam into the booth, causing Rick on the other end of the line to joke around, "Some of you get out, please, you're smothering me! I can't breathe!" The wedding declared officially over, the minister firing a pistol into the sky on cue, Rick came across the road, having spent his wedding in a building, some building over on the Rhesus campus. I don't know which one, maybe Primate Hall.

He had never vowed that he would avoid wedding receptions, so they all went over and had all the usual fixin's, while the kids outside tied tin cans to their car. The mischief went one step further, however, with them also going through their luggage and spray painting Cynthia's underwear red. That ought to make 'em think!


ADVERTISEMENT:
Today's blog post is brought to you by
RHESUS COLLEGE,
Jefferson, Iowa
"Home of the Fighting Monkeys"

RHESUS -- "For All Your Educational Needs"
Posted by dbkundalini at 7:38 PM