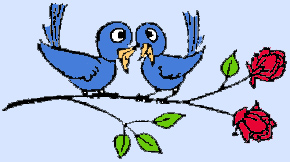 Must has been written about birds, everything from what they have in the encyclopedia to whole books exclusively about them. One of our most famous bird experts was Audubon, who wouldn't have had anything to do if it weren't for birds. We have birdwatchers, bird cameras, and birdbaths. I personally own a birdbath, and it might actually have water in it.

Even with so much being written about birds, I sincerely believe the world can stand one more article. And so this is it.

My interest in birds today has to do with the famous opening to the "Adventures of Superman" show from the '50s, starring George Reeves. A crowd is gathered below, all looking up, and a kid yells, "It's a bird!" It strikes me as funny that he would be so excited about seeing a bird that he would yell out in a crowd and point at it with so much urgency. Hadn't he ever personally seen a bird before?

It could be that Superman was flying by so fast, so the kid thought he saw a very fast flying bird. Or that Superman, being the size of a man, would have made a spectacularly large bird. And instead of describing the possible bird as large or fast, which would have required some time, he just yelled out the shorter version, "It's a bird!"

But is it reasonable that there would be a bird the size of a man flying above, or a bird flying that fast? It could be that they hadn't seen Superman that much, except the last voice gets it right, "It's Superman!" So Superman isn't a stranger to these people over the skies of Metropolis. Making the original bird comment sound kind of dumb.

What other times was he mistaken? At Christmas when he had a package holding a wristwatch and he thought it might be a bicycle? "It's a bike!" "No, Billy, it's a watch, it's a little small to be a bike."

Birds. I see them everyday and it's not that exciting. Yet, think of it, these are flying creatures, without a flying machine! They just know how to fly. It's amazing. And it's really amazing when you consider where birds came from, according to what scientists say. DINOSAURS! That's some pretty tough genes birds have.

The dinosaurs, some of them anyway, started flapping whatever appendages they had. Maybe they were near a cliff and some of them actually glided to safety. These ones kept reproducing, showing their young by example how to jump off a cliff, with the very adaptable ones landing, meaning these would be the ones to reproduce. And guess what? It was the smaller dinosaurs that generally landed, meaning birds would progressively be smaller than their dinosaur ancestors. Once they took to the sky, there were no rules to hold them back. So that is exciting.

Naturally, the whole business with dinosaurs and this progression from dinosaur to bird took ages to be accomplished. By the time we got to Bible times, then, relatively not that long ago, birds were already old enough to be considered a particularly created species. So they fooled everybody, even Moses, perhaps. Maybe Moses knew; I don't want to dis Moses. If he wasn't ignorant of the whole matter, maybe he simply felt the time wasn't right to spring it on the world that birds came from dinosaurs.

Superman turned out definitely to not be a bird. Let's look back way before the TV show and earlier serial films. If you go way back, Superman didn't even fly, he just made big leaps. He was subject to gravity. This fact of leaping carried over to the phrase, "Able to leap tall buildings in a single bound."
Posted by dbkundalini at 4:00 PM