Vigor Vivus At The Dentist 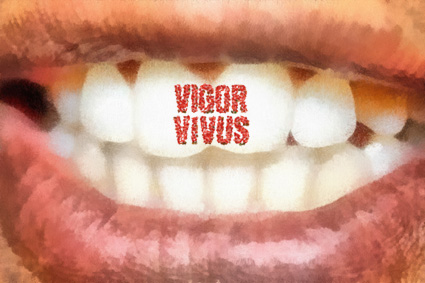 Something's apparently off with my karma, necessitating two trips to the dentist in less than two weeks. Thankfully, barring a smack to the mouth from some jealous boyfriend or girlfriend, my next appointment isn't till January.

My last appointment was an ordinary cleaning. The teeth in the picture aren't actually mine. I wish they were. But I'm old and my teeth are not good. But I keep up the good fight by going to the dentist. It's unfortunate I didn't have that same resolve for close to 20 years, a big gap of time in which a lot of bad things can happen.

Now, though, I'm regular, and I'm doing what I can to keep things patched up, so there was the cleaning a couple weeks ago, then a few fillings today. Four to be exact. I went in thinking it was going to be two, so right away I saw the opportunity for a bad mood before me. But I pushed it aside, feeling that it wouldn't do any good. If the dentist wanted to do four instead of two, so be it.

It's the next bit that has to be the most excruciating and the most fascinating. I have to be honest, I hate the whole process of sitting there with the wedge between the back teeth, the mirror, the fingers, the drills, the suction, and whatever else there may be, in my mouth. Oh yes, the syringes! I hate them either most of all or equal to the drills.

I have this thing about the spiritual life that it's supposed to be very close and real, so I'm halfway depending on that to get me through. But it also causes me anxiety, because I'm also halfway afraid that I'm going to have a major spiritual melt-up -- from the base of the spine to the top of the head -- go nuts, and end up with a drill sticking out my eye, or a syringe. Because of the intensity of those things, and the fact that there's no telling what buttons they might be pushing, in addition to what my psychology is suggesting. When it comes to chakras, they're subtle, but I think that about anything you imagine can have a true aspect to it. It's dangerous.

So I have that going on -- and my other thing is the great philosophy of Vigor Vivus versus Rigor Mortis. In fact, I use my philosophy of Vigor Vivus not just in conjunction with the spiritual life but also as a safeguard against it interfering with the dentist's work and my safety. Because, and I probably don't have to tell you, the thought behind Vigor Vivus is more of an earthy, everyman philosophy, so it's more helpful in our day to day affairs. It can guide us in everything, from business to dating.

Just to catch everyone up, I have multiple posts on Vigor Vivus versus Rigor Mortis. The basic thing about VV and RM is that they are ways of thinking that ultimately have to do with your quality of life. VV is that boisterous sense of abundance welling up inside, most in line with nature at its fundamental level, and with it you have confidence, boldness, self esteem, and other similar qualities. Its opposite, RM, is what guides a lot of people's thinking -- too many! -- and that's akin to being dead while you're alive. You're drawn up, tight, lacking confidence, dreading the day, pessimistic, and, really, not giving yourself credit for anything. There's no real sense to RM, but it's an easy snare to fall into.

Like I said, Vigor Vivus is more in line with nature, but there's many reasons why we don't walk in it. One, I guess, we seem to think we've gone beyond nature! How about that?! Two, we're not looking on the bright side, we have bad habits in our thinking, and it gets worse the longer we dwell in it. That's the place of Rigor Mortis, giving our life and opportunity over to death. I know how it goes, because like most people, I've been there plenty of times in my life. And sitting in the chair at the dentist, with the wedge in your mouth, the suction making me gag, and all the rest, I know Rigor Mortis still has a few suggestions for me!

But my response is to consciously choose Vigor Vivus. I say to myself, "Vigor Vivus will be my way!" I remind myself who I am, the life of abundance I know, etc., and I try to enjoy even those moments in the dentist's chair as much as I can. I think about the needle going in -- and of course the pain is deadened, but still you can sometimes sense the flow of liquid and you know any little move could be dangerous -- and I remind myself, This also is an experience in life! And it's intense, and very concentrated! Vivid, even! Sure, I want to be out of this chair and in my car going home, but I choose to experience this as part of my good life as well!

Oh, one of the fillings was on a wisdom tooth. And the Cosmic Father/Mother in His/Her infinite wisdom chose not to put a hatch on each side of our face. So they're hard to get to. Then He/She chose the placement of these teeth to be right in line with the bones leading to our ears, meaning the drill sounds like it's going to come through the back side of your eardrum. I'm thrashing about with my legs while keeping my mouth perfectly still, I'm as uncomfortable as can be, it's crazy time, but I'm reminding myself ... Vigor Vivus, Vigor Vivus, Vigor Vivus...

After it's all said and done, I stand up and thank the team -- the dentist and the able assistants -- for a job well done. There's high fives all around, and plans to do it all again someday. I get the bill, start to mutter, then repeat internally, "Vigor Vivus, Vigor Vivus..." and gladly pay it.
Posted by dbkundalini at 7:22 PM