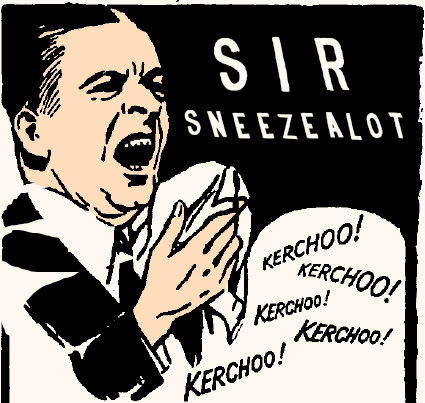 Much of the success we have in life comes from the thrust we have. Thrust is that compelling force, that, whether it's forced on you or forced from you, makes you move, and makes things happen. If you've ever had an uncle who literally kicked your ass, you know what I mean. When he said clean the shop, you hopped to, but without the thrust you might have remained inert.

Speaking for myself, and countless others who suffer like me, I have a little mental thrust. It's the equivalent of kicking yourself in the ass, but there's no bruises. My mind says "Do this" and "Do that" -- it's the normal drudgery of responsibility -- and I hop to and get it done. But whether it's physical force exerted on you or an inner force, the result is the same, thrust and accomplishment.

So far, so good. But what if you're a guy like Sir Sneezealot, whose body provides the thrust, even if it happens to be at inopportune times? (His real name is something else, but he got the moniker Sir Sneezealot from the women he knew. Once you've burnt X number of women, they bruit it around among themselves, and next thing you know you've got a bad reputation and maybe a weird nickname.)

Sir Sneezealot had a problem with sneezing even before he was old enough to be called Sir. When he was a kid. It plagued him, all the random sneezes being a nuisance as a child, a youth, a teen, an early adult, and so on. His mom hated it, for sure, and was the first woman he offended, when, because of all his sneezing and thrust, she was changing diapers all day long. He also had problems with other boys, like in the shower after gym class, sneezing and peeing across the room like a rainbow. The thrust of youth!

I'm describing problems, there's no other word for it. School dances, normally a time of fun and innocence, were ruined for Sir Sneezealot. He'd be dancing, then a sneeze came, and he'd be pushed awkwardly into his date. If there's a whole gym full of kids, one kid bumps another, and before long a fight breaks out. But he tried his best in his teen years, and that's also when he really got his yen for girls.

I said it was a time of innocence, which is of course a lie, such as the time he and a young gal were behind the curtain on the school stage. He sneezed, the curtain flared out, and it practically killed her from embarrassment when everyone saw her blouse hanging off. She yanked the curtain from its upper moorings to cover herself and ran from the building, dragging with super strength that 200 pound train. She finally collapsed from exhaustion three miles away. What a struggle! Behind her, she left gardens devastated and picket fences collapsed. And yet -- it was hard to see it at the time -- she was one of the lucky ones...

Because Sir Sneezealot went on. Anyone with that much thrust can't be held back. And it was kind of exciting -- he liked it, he loved it -- all the serendipity that comes because of a problem he couldn't help anyway. He would let it come as it would, and even time to time accentuate it by sniffing pepper or staring at the sun. Ways like that that make ordinary people sneeze, to him were like gasoline on the fire, the eruption being so massive, there's no calculating how many kids he fathered.

He'd be on a date, and let's just say things would get amorous and out of hand. This is what happens to the rest of us without a sneezing problem. Just think how crazy it would be: You're gauging everything in a relationship as it progresses, and the heat of the moment is now, and a sudden sneezing attack comes on, with all that thrust, and you end up with triplets. And protection isn't actually protection, because it's designed for people with normal thrust. You name the protection and I'll tell you why it's no good; his thrust was always just that much stronger. He'd shred it! For him, the floodgates were always open!

OK, friends, I'm trying to be discreet about his dates -- whose daughters they were, etc. -- but the bottom line is, this guy fathered roughly every sixth kid in the county. He was like Screamin' Jay Hawkins, but more of a local guy. Then after a number of years, he had to move away because ... people hated his guts, especially women and their fathers.

They would hear tell of him, but if he's not sneezing during the meal, the movie, the late night drinks, or the preliminaries on the couch, what makes you think it's him? Then, suddenly, KERCHOO!, and they're picking out wallpaper for the nursery.

Ladies, and dads, Sir Sneezealot is still out there ... somewhere.
Posted by dbkundalini at 6:52 PM