Drink With Us On the Bus 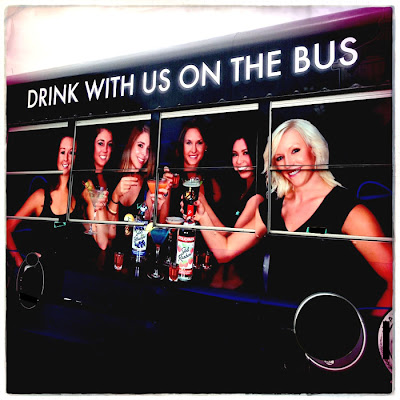 I've seen this bus around many times, and probably the less said the better. I've had to stop and think a few times what's going on. I'm still not 100% sure, but right now my best guess is that they shuttle people in, then see that they get home safely after drinking. If that's not it, I'm sorry. I'm not identifying the bar, so as not to misrepresent their policy.

But you might get the impression, since it says, "DRINK WITH US ON THE BUS," that you're going to be literally drinking on the bus with these particular ladies, or others. With all sorts of possibilities that could follow, including parking at some secluded spot out by the lake, with one guy, a burly bartender, standing guard against bushwhackers. Again, I don't know ...

Let's say that not what's going on. I accept that. But what if you had a guy who thought, Hey, ladies that want to drink with me on the bus! We're looking in on this little scenario as the screen goes wavy, then we focus in on a particular guy, whom we'll call Walt. Walt has just entered The Drinking Bus Zone.

Walt approaches. The bus is very dark and obviously no one's there. "I'll have them all to myself!" he says with relish, then jimmies the door and gets in. Now it's just a matter of waiting. So he's sitting there, occasionally looking out the window. They must live around here, since this is their bus. But the night is wearing on and no one's coming by for drinks.

As Walt gets a little groggy, he stands and walks around. He sits in the driver's seat, commandeering the bus in his imagination, and taking the girls out for a spin. Where they're going, no one knows, not even him. But they'll know when they get there. One possibility would be a cool nightclub, where they wouldn't have to drink on a small bus.

Although, it might be a better plan just to drink on the bus; with such a small space there'll be less competition. Maybe just Walt and these six! He takes a long lingering look at the one on the right end. The bar on the window really accentuates things. Everything above her mouth looks like a cowl. Still, that's just a picture, she has a normal head.

Time passes, and Walt's rooting around in some stuff, when he pulls out a cooler, a pretty good-sized cooler. It wouldn't hurt to set out some drinks, just to be ready when they show up. One here, that's his, and six around a small table. He gets thirsty after a while, of course, with the temptation, and drinks his own. Then reasoning that he can always refill their glasses when they get there, he goes around the table drinking each one.

After another round or two, the picture on the windows is starting to come to life, almost. They're certainly doing a halfway seductive dance, which has to be fun to see. Walt puts his arms out for a huggy-bear, then drops them. Playing hard to get, eh? He looks up, bleary-eyed, and makes some suggestive remarks. No bushwhackers are in sight, and it's only natural. But still, they're reticent.

Pretty soon, a cop comes around.
Posted by dbkundalini at 10:07 AM