How To Get Your Brother 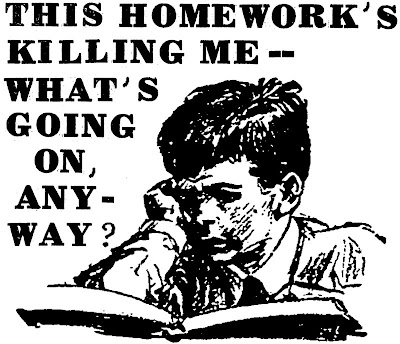 Here's a super suggestion for kids out there. Let's say you're a boy, and there's brothers involved. I know, say no more, it's rugged, constant competition. If there's a girl in the mix, of course she's got it easy...

Well, you can see how our competition went. So this scheme wouldn't have worked to my advantage, since they were brains. For me, the scheme should've been to sink their hopes along the way. Then I, even in my present penury, destitution, really, would be sitting pretty. I could always say, At least I've got a place to flop.

The scheme is this, to load up your brothers with tons of homework, thus depriving them of the joy of recreation and free time. One advantage for you -- in addition to sinking their hopes long-term -- is it frees up money Mom and Dad would be giving them, meaning you can expect more. They're home hitting the books and you're out having the time of your life.

But how to achieve this worthy goal ... yes, yes, I say, scratching my chin ... how to do it. The answer is a variation on writing notes to the teacher excusing yourself for being absent: "Please excuse Jimmy for his absences all five days this week. He had the 24-hour bug. Sincerely, James S_____, Sr." The big problem with those notes is they're always suspicious. You really have to work to pull it off, especially in these days of DNA testing. If your parents' DNA isn't on that paper somewhere, the school will know. Which would be a real good reason to keep a pair of your Dad's unders in a plastic bag somewhere, but that's advice for another day...

This scheme is entirely safe without DNA, because it's so incredibly UNsuspicious, the teachers will never know. And even if they do, they'll probably go along with it anyway! Because they believe in homework. And the letter gives them a good excuse: How are we supposed to know it was written by a kid? They've got plausible deniability. So it's win-win for everyone involved, mostly you.

OK, I know you're with me so far, because you're no dummy. Now you simply need to know how to copy your Dad's signature reasonably well. And come up with notes something like this:


Dear Mr. Rasmussen, I have been concerned about Jim's academic progress for quite some time. I'm afraid he's falling behind, which can be devastating to his hopes of going to Harvard. And so I ask that you double, or even better, triple his homework for the foreseeable future. Please don't tell him I asked you. Let it be our little secret. Yours truly, Mr. James S. ______.

See what you've done. The teacher's entirely gratified that someone still believes in homework. What with online gaming, most people have given up on it entirely. Your dad realistically would be happy with the sentiments of the note. And you've effectively cut your brother off at the knees ... forever! There's no weak link!

Anyway, the year progresses. Jim's working like a dog, your disposable income has doubled. Then you get the other brothers involved, and, depending on the number of parental indiscretions in the bedroom, you have that much more income. By now, you have so much, you're loaning it to your friends at high interest. You're the school's number one loan shark, breaking legs, whatever it takes to stay on top. Kids who don't pay are falling off the jungle jim, even dying, meaning the science program gets that many more specimens.

But beware! They might be like my brothers, they could really take to this. And if they actually study too much, and like it, they might show you up big time. The best thing you can hope for is they do all this homework, but do it half-assed and still fail tests. If you can find a quart of lead-based paint --- no, no, forget I said that.

I don't know what the problem was with me and my more illustrious brothers. I don't remember them doing much homework. No more than me, which was barely any. I remember having to write a one paged theme on "Africa" in 6th grade. That was about it. But my brothers were just naturally smart.

I have excuses, good ones. They had it better than me. I was the firstborn, the one my parents learned from. By the time the others came around, they knew how to do it right. That's probably half of it. Also, whatever good qualities they had genetically must have leapfrogged over me. Probably having to do with my conception, in the rugged surroundings of the backseat of a car. Whereas, by the time they had me they were married, meaning my brothers came along in the more comfortable featherbed. No bouncing around or squeezing of the genetic information. In science, it's like the difference between handling bacteria in a nice clean Petri dish or scooping it up in a beer bottle. That little bit of beer stunts them.
Posted by dbkundalini at 9:26 AM