The Jumpatron -- Nothing Gets the Jump on Me 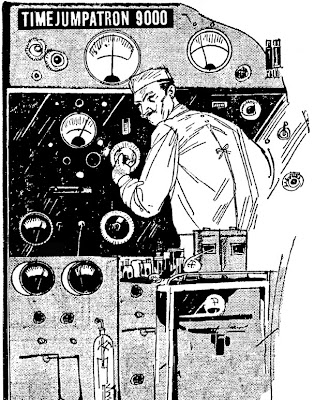 I know, it doesn't look like a 9000.
A guy modified it for me with parts
from a 9100. I like the added
horsepower of the second large gauge.

I've long been known as a trendsetter, even though I hate that word. Still, it's descriptive, and that's what counts. Other kids were doing the Twist, I did the Time Warp. In the days of tie-dye, I had a preppie look. When backpacks were the rage in the '70s, I carried a briefcase. Other kids carried their books one hand on the side, I held mine two hands. They tried to clear up acne, I went au naturel. They dated girls, I was stubbornly celibate.

I've taken some pride in all that only because a positive self-image means fewer expensive prescriptions. But what it really comes down to is a fear of someone or something getting the jump on me. The reason I've always anticipated trends -- what's hot and what's passe -- is that I've always studied the angles. Completely out of fear. Always looking behind me. Checking under the bed. Counting my pennies 10 times.

When it comes to the normal everyday things of life, I'm always thinking, "Yeah, it's cool-looking on one level, but what will it look like in 10 years?" So the future itself doesn't get a jump on me, I'm very judgmental of things.

You hear people do it all the time, but most of them are late. Like portable, mobile phones. One of my uncles had a car phone in the late '50s. He beamed with pride when he showed it to me. But it was like one of those old crank phones, about three foot tall, a horn you talked into, another piece you put to your ear, with a weird cloth cord. I hated to tell him, "Not good. You think it's cool, but this is about the dorkiest antique I've ever seen." I was five years old, so I couldn't hold back.

It wasn't till the '80s that the big monster cell phones, mobile phones, became a mass market item. But remember them? It was like a suitcase with an antenna. We had a youth pastor at church, around 1989, and he had a fake toy phone. He told the kids he thought he looked cool when he was driving around pretending to talk on it. "Look cool?" I thought, "please, that's so old -- even though it's new -- it's ridiculous!"

When you're this way, as I've always been, you're hard to impress. But, again, it's all fear. I realize that, this damned obsession with everything getting the jump on me. So what do I own? I'm a little embarrassed to say, I have an iPhone. I was real reluctant to get it, knowing how it's going to seem someday, but I've never had the talent to build my own phone of the future. And even if I did, I'd get in trouble trying to independently build an infrastructure to handle it.

That's also how I've been with music. The various decades stations on the radio never impress me. They're so excited to be living in the past. While, in the past, I had my eyes on the horizon. Have you ever listened to the '60s channel on Sirius XM? If it's the same as it was last time I was a captive audience and had to hear it -- while getting my oil changed -- you have DJs pretending it's 1966 or 1968, saying passe things like "Sock it to me!" and "You bet your sweet bippy." I remember that at the time. And I was sitting there silently, not allowing momentary catchphrases to get the jump on me. If I was going to say anything, it'd be something from the '70s, the Fonz going, "Aaaaaa!" Which didn't make sense, so I was silent.

You might think, "Wow! Let's follow this guy around. He'll point us to the next big thing, and we'll make a fortune." But it doesn't work that way, because even though I know a lot about what's cool, speaking of the future, even to tell someone is in essence the future getting a jump on me. I can tell you this much, the future's pathetic.

I've done some serious study of the past, as an aid to keeping ahead of the present and to anticipate the future. Looking at the old radios and old cars is a real blast. There's an interesting fact about radios from the 1920s. They look almost identical to modern radios/iPod/Bluetooth players, horizontal with two small speakers in front. Quite a bit different from the radio monstrosities of the '40s. I was always aghast at those big things. To think, we could've had a second garage. Or room for a Jumpatron, a time-traveling, time-shifting, trend-discerning piece of hardware. I just checked my 9000. It says that everything except itself is nearing obsolescence.

And as for cars of the past -- all of them being horrendous, very ugly -- the cars of the 1920s are so old-fashioned looking, it's pathetic. Those big square corners, looking like something out of a gangster movie. One, they should've totally avoided the gangster look. And, two, they should have realized, these SOBs just look old. I can see me now, if I were suddenly back in the '20s: "Is this the best you can do, or are you pulling my leg?" Sheesh!

The basic rule of thumb to remember is this: If it looks cool today, it's passe junk tomorrow. Get a jump on the future before it gets a jump on you. Essentially, don't do or own anything.
Posted by dbkundalini at 8:19 AM