I Saw a Real Bumpkin 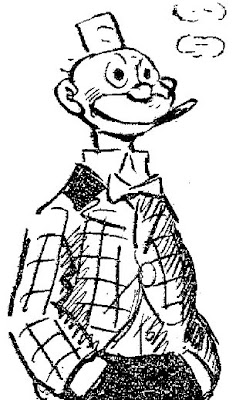 I saw a real bumpkin today, a real dweeb. I haven't seen an eyesore like this in a long time. He was a sight for sore eyes, after the fact. Like a train wreck on two legs. He couldn't hit the broad side of the barn of respectability, and that's putting it nicely.

What an appearance. I was embarrassed for him. I covered my eyes at the sight. But then I gave in, I couldn't look away. It was all too much, so revolting I don't know where to start. What the hell? He either let himself go, or he didn't have much to work with from the get go.

This was seriously a face only a mother could love, like something out of the funny papers. I thought it had to be a gag. Like getting makeup in reverse. How much of an absolute shambles can one person make himself? But he wasn't laughing, and it didn't look like a put on. I'm convinced this was actually the guy's real self. You know how nuclear waste has a half life? That's about what this guy has!

One thing he's got going for him, he's not overweight. He's skinny as all get out, like a toothpick, like twigs. His hair was outrageous, little tufts here and there, no definite arrangement. Of course what hair he had with any fullness was coming out his ears and nose. He had a long neck, like a giraffe. I couldn't look away. I'm just wondering what he sees when he looks out on the world, having the buggiest eyes ever, and cross-eyed to boot! His complexion was something from a pizza shop, and his nose was enormous, room for four nostrils.

I had to pass him on my way somewhere else. And stink! He stunk! To put it nicely, something of a fragrance, a little on the strong side, fairly stout. Good thing his pants were fastened, because they might've walked away without him, it was that bad. This was the kind of smell that sticks with you, and he was living proof of that. It might be a good idea to get this guy a bath. Shoehorn him in, anything it'd take to at least start the process of cleaning him!

His voice was another disaster. I heard him saying hello to someone. Most of us were standing around staring. He talked like a musical instrument gone sour, no music to it, just a kind of ridiculous warble. I have a word for that kind of voice, Durwood. If that's your name, sorry.

Like I said, I was thinking maybe it was a put on. He reminded me of one of my Grandpa's old jokes, actually my Grandpa's only joke. This is from the 1910s or '20s. A particular bumpkin comes to town. The townspeople see his backward ways and take him under their wing. They start off putting a necktie on him. Once he gets the tie he stands in one place for three days. See, he thinks he's a horse tied up! I remember Grandpa crying his eyes red telling that. This guy today would've tickled Grandpa's funny bone, that's for sure!

I wanted to keep track of the guy. See if there were any cracks in his facade, because maybe it really was a put on. He didn't look like he was in on the joke, but that's exactly the kind of discipline a trained performer might have. Come to a town, present himself as a bumpkin, then turn it around and let the joke be on us. I didn't want that to happen. I looked around carefully and didn't see any obvious confederates of the guy in the groups of people observing him.

This really sort of helped me socially, in a way. I don't usually talk to people downtown, therefore I'm always beset by loneliness. But others were making witty asides about the guy to me, and I was making others right back. A few hand slaps among us. I've noticed something socially these days, that we're all comedians. It might be the most predictable sorts of stuff, but it's all funny in the moment. I laughed at them, mostly so they'd laugh at me. The only guy not laughing was the guy himself, as he seemed oblivious to anything but his own inner being. Whatever that must be!

As I was going along, then, carefully keeping track, I saw the bumpkin making his way to what turned out to be one crummy car. Of course! Like a Bumpkinmobile, which ended up rattling down the road. How he ever got the thing licensed I don't know. It didn't look particularly road-worthy, just, predictably, a hunk of junk.

Even now I'm laughing. I just hope the memories of this, etched in my memory cells, don't keep me from sleeping later on, and don't make me physically sick.
Posted by dbkundalini at 6:00 AM