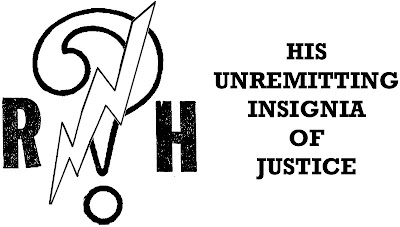 This is the kind of hero I like, a reluctant one, who has to realize his potential heroism. He got bit by a spider, nothing happened. He fell into a vat of nuclear waste, nothing happened. And he took a course on the history of comic book superheroes, which bored him to tears, all the cliches. But when the subject came up, What about you? he said meekly, "Who? Me?"

All this happened in Mediapolis, where he was born, and where someday they'll erect a statue to him. As for now, the police are chasing him, with all their expensive gear bought with Homeland Security largesse. When the whole terrorism scare of the 2000s took place -- when we were so terrified we even renamed French fries -- H.S. was delivering gigantic amounts of money to small police stations in large unmarked suitcases in large unmarked trucks. So they ended up with a lot of unnecessary command units -- mostly used to monitor unsuspicious activity at the July 4th parade, kids taking pieces of their brother's cotton candy, etc. -- and stun guns, poison darts, tasers, lasers, and a few smart guns that hit their target but cannot kill, grazers.

What they didn't have was a super hero. Till this guy -- whose secret identity is so secret that even I, the omniscient narrator, don't know it -- said to himself, not repeating it anyone, "What about me?" I get that feeling once in a while. There's no reason it couldn't be me, although in this case it was him, since I don't live in Mediapolis. He accepted the call and came charging on the scene. Please don't get bored to tears, I'm hoping this gets better...

Now, the Reluctant Hero has a close ally, who presumably know his secret identity, his mother. She's in on all the local gossip, and flashes his sign in the sky, the insignia seen above. A question mark, indicating his reluctance, and a lightning bolt, showing his later determination. If it's night, he pops up out of bed, going, "What? At this hour? Am I supposed to be watching the sky all night? What kind of life is that? And if the crime happens in broad daylight, what then? If it's not a cloudy day, how am I ever going to see it?"

All right, he has the Reluctant Heromobile, nothing like the fancy stuff the Mediapolis police have, just a typical junker, an old Ford Taurus, reluctant to start, outfitted with a few tools, various extinguishers, grappling hooks, and a cotton candy machine for the kids. And whereas the police are stymied -- they have so much fancy Homeland Security equipment they barely know how to use -- the Reluctant Hero puts the pedal to the metal and gets the job done.

His super powers are: 1. Force of personality by virtue of his determination, and, 2. Miracles. Thinks what he wants to happen. A quick pose as a question mark, followed by thrusting his arms, one up, one down, like lightning. The sound of thunder rumbles through the town. He nods his head and it's done.

What are the police doing all this time? They eventually show up to collect the piles of human rubbish. But most of the time they have their wives on their mind, or their girlfriends -- sexual stuff -- and they want to get back to them quickly, so they're not very dedicated. That particular area needs single, fearless guys, to set aside the Homeland Security gadgetry and simply charge in with a sword. Anyone can handle a sword. You slice and dice, nothing to it.

As of right now -- and the police think he's a criminal himself, which is what also happened to both the Lone Ranger and Superman when they started out --  the Reluctant Hero has bested the police every time. May they someday say the same thing of all of us, or something equally glorious.
Posted by dbkundalini at 5:57 AM