The NSA Cleans Out My Garage 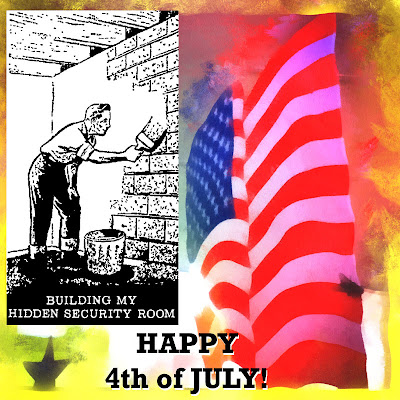 The news reports are telling us these guys -- the National Security Agency (NSA) -- can do anything. They're able to keep track of every call you've ever made, every piece of mail you've ever sent or received, and every note your friends used to pass in school. There's nothing they're not good at! Giving lie to the old complaint that the government can't do anything right.

Seriously, with this record of efficiency, we need them to keep going and take over the rest of the government. Get in there and start with Congress. Congress can't get anything done, anything that does anyone any good. Put the NSA on the job. Start right at the top and maybe they can accomplish something. Then they can work their way down. Far down, as in helping each one of us with our day to day lives. I know I could use some help cleaning out my garage.

And if they didn't want to do it just to be nice guys, maybe I could trick them into doing it. Sort of like Tom Sawyer and the fence, except I'll have to drop hints that maybe there's something incriminating in my garage. They're actually is ... more about that later ... but by the time they get here, of course I'll have that stuff safely tucked in the hidden room I've been building. Which is right there in the garage, but it's small -- they probably won't notice it.

For the most part, all I have in my garage is the typical everyday crap of life. Stuff that would overrun the house if I kept it in here. Nothing too important, but still too good to just throw away. Old books, records, rugs, lamps, a typewriter, and just boxes and boxes of miscellaneous stuff. There's quite a few Christmas decorations, some of which are only in sacks, and some of those are tipped over. It seems like I step on and break an ornament every time I'm out there. If I can get the NSA to clean it out, that'd be great. Who knows? They might find some unregistered nicknacks, bought with cash at garage sales, very tough to trace.

Then there's the other stuff, which will have to go in the hidden room. I know everyone will think I'm kidding, but that's only because you didn't have a Great Aunt Natasha working as a secretary at the Pentagon in the late '50s and early '60s. The fact is, I have extensive Soviet correspondence from the '60s, going into the '70s. I was one of those kids, thanks to Aunt Natasha, who was a "goodwill pen pal" with Khrushchev, which later bloomed into a nice relationship with Breshnev. For them it was an in with America's youth, hoping to undermine us, but for me, I was only doing it for extra credit in Social Studies.

Still, it probably should've been cleared through official channels. As it was, I was only too happy to fulfill their strange requests. Like going to Air Force installations and using my "secret spy binoculars," which they provided and periodically showed up "to have developed." I never knew what that meant, developing binoculars? Other than that, we had quite a bit of correspondence about the comings and goings of local Civil Defense volunteers. I still remember this one old guy from town and the day his Jeep blew up. Must've been something wrong with it.

Natasha's husband, our Great Uncle Boris, was also a help. Anything he needed, us sneaky kids were happy to help him with. Especially if it meant being paid off in rare Russian candy. Which I, ever the entrepreneur, used to trade with other kids for Krugerrands and Cuban cigars. It was very good candy, they say, but the cigars were better. There was more than one bright side ... The kids at my school did great on international affairs quizzes.

Later, and this is stuff I shouldn't mention; it's all more recent, there were Uncle Osama and Uncle Saddam, not really uncles but that's what they called themselves. Wow, the things they used to send! Gift certificates for flying lessons. I always figured they were kidding. And the things they would say! No one could be that crazy, wanting that much destruction for the United States. After all, I was like their favorite nephew. OK, they did tell us they wouldn't completely destroy America till they got us to safety. So we didn't say anything to the cops. Those records will go in the secret room, for sure.

I just got back from the garage. And speaking of Christmas decorations, there's a bag of ribbons on the floor that must puff up with air by miracle, because every time I try to walk through the garage, I step on it, and I can hear the air hissing out again. Weird. The things I put up with.

I looked around and there isn't much else that would be incriminating. I have a hymnal from Burma out there. But that's nothing to worry about, is it? Only the channels I went through to get it, it probably involved some persecution. And maybe a death or two. I need to hide it.
Posted by dbkundalini at 12:58 PM