You Can't Dress a Wound at the Library 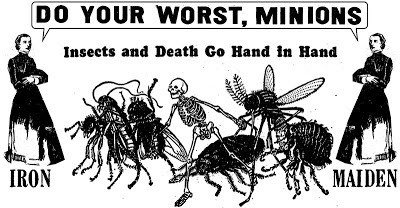 All of us are amateur doctors. Sometimes we have to doctor ourselves. First aid and beyond. Taking care of things that have festered and erupted or that have been picked. That's your experience, too, isn't it? No big deal. Nothing to make a federal case out of.

This being then our common lot in life, wouldn't it stand to reason that you would be welcome to do your doctoring anywhere? That's definitely the way I see it. You don't want to bleed to death because you're untreated, or allow infection to get in there and make things worse. So.... where's that leave us?

Well, apparently there's one isolated place in the world where you're not welcome to doctor yourself, the library. Ordinarily this would come as a real shock to me. I used to think libraries were like centers where the next Renaissance could break out at any minute.

But over the years I've repeatedly seen that bubble burst, with all the things they don't allow: Children checking out adult books, anyone who might want to read their Bible and/or pray to do so, and anyone to read the daily newspaper without having to go through the histrionics of putting their keys or other valuables up as collateral. It's ridiculous the things they do. Oh yeah, of course, they don't allow sleeping. Although I'm given to understand that each one of them sleeps on a daily or nightly basis. Yes, I'm bitter ... but I'm trying to tamp it down.

They have this one old gal, very narrow eyes, prominent nose, hair pulled back tight in a bun, very pasty features, high collared, and puffed out dress like an iron maiden. An old schoolmarm reincarnated from the 1910s. Sucks on a lemon before coming out of the coffin they keep her in. Doesn't really walk, just floats on a cloud of hate. She's got her finger on the pulse of every activity, to discern it, then grab it in a stranglehold. It'd take a wooden stake, a gallon of hemlock, and a truckload of garlic to get rid of her. I certainly wouldn't waste silver bullets without a backup plan. It'd be interesting to know what she was like as a girl. No doubt a fearsome little prune.

Well, she was lurking about, just like clockwork, right when I needed to change the dressing on a sore on my arm. A small little sore it was, nothing particularly infectious to anyone else, I'd say. It started as a mosquito bite, then I scratched it raw. It joined with a second bite, then a third. The mosquitoes had zeroed in right there, like dive bombers trying to systematically take out the arm, methodically hitting it in the sweet spot. So I put on it a dollop of Neosporin and a bit of dressing, a bandage. Then I believe in changing the dressing frequently, every 7 to 12 minutes right on the dot.

OK, I got it accomplished a couple times, when, guess who came floating by? She must have been sniffing the air and following the breeze. But the first couple times I was done and had my dressings hidden in my stuff. I aimed my eyes studiously at the book and waited for her to drift out of sight. Ghostly! My forehead's still moist from the anxiety. My hands were shaking. I had to look like I was having withdrawal pains from something!

The next time I was more careful, getting up and going over by her station. It looked like she was involved in an ongoing project, pulling the wings off a pile of flies, some kind of weird experiment, so I returned to my place and got my stuff out. I'm imagining her nose went up quickly, smelling it, because out of nowhere she reappeared, looking particularly noxious. She's always bold, in this case telling me that dressing wounds isn't allowed in the library, and insisting that next time I would be dragged out, and perhaps flogged in the parking lot. She didn't use those exact words, which I don't recall, but with her it'd have to be something medieval.

I'm actually still here, but I'm trying to be on my best behavior. I might bleed to death if I leave. The wound is oozing some kind of vile corruption. It's been dripping on my pants for the better part of an hour. I might need to seek out professional help, if there's anyone with that much expertise. Get someone who knows about mosquitoes and what's going on with them. I think maybe they've interbred with wolves. You get a deep chunk bitten out of your arm like this, and it's itching to boot ... it leaves very little room to scratch, so sometimes I have to scratch the other arm and hope for sympathetic relief, a crosscurrent.

I hope I survive. Is that so much to expect? I still believe I have things to live for. I have a daily newspaper subscription I just mailed in the check for two weeks ago. Someone needs to feed my dog. I've got plants to water, including tomatoes. Plus there's always spite. Sometimes, dammit, I keep living just out of spite, pure cussedness. A lot of people want me dead, these librarian bastards for one. They see me as a thorn in their side. Sure, they keep up the renaissance facade, but someone -- me -- keeps pulling the mask off. If they didn't have so many good books and CDs I'd say, Shut the whole place down!

I'm not for sure the iron maiden isn't eavesdropping on me typing this. She has a computer in front of her. Probably knows how to use it. If you were so toxic that people couldn't stand to be around you, wouldn't you look for every advantage? Some use the computer out of goodwill, and some with bad. I suppose I should rejoice that people use them at all. If it betters them. Or hones their craft. Although in this case, when it's pure evil, whether that should be encouraged remains debatable.

No doubt she has her reasons. And probably even a weird, perverted sense of joy ... Which, honestly, I guess would be kind of fun, to nail people left and right for offenses, if you're into that. It'd be an interesting job. Except my personality is more or less such that I'd allow almost anything. Then people would be running wild and I'd suddenly realize, I should have been more strict. Still, she could loosen the puss strings a little, couldn't she? ... get the sour off her face.