Paywall -- Dreaming of The Whole Enchilada 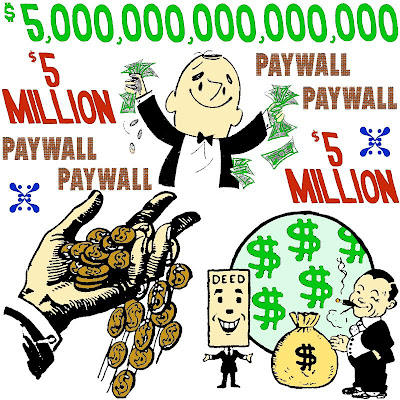 I still haven't heard from anyone about subscribing to my blog. And you know something? I'm surprisingly calm about it. I'm not embittered in the slightest. One, I'm sure there will be a few pipsqueaks come through with a One-Day subscription, at the Wimps level. And I can probably count on it that at least two or three will eventually show up with a week pass, at the Banties level. But if they don't, hey, it's their loss. I'll be sitting behind my paywall enjoying myself!

Still, it'd be cool to make a lot of money, even if it had to dribble in at $100 a day or $700 a week. Multiply the possibilities, even the Wimps and Banties could make my life more comfortable. Obviously the more Banties the better. At $700 a week, if I could get 100 Banties, that'd be .... quite a bit of money. Enough to do a few things anyway.

Then there's the possibility of some Monthlies and Yearlies. Big cash there. I'd be set for life, to a certain extent, although there'd always be the possibility of losing them. What I'd really love to get is one Lifetime subscriber. There'd be no losing that person. He or she would pay the Lifetime fee, then be locked in. Which, as I recall, I said would be $5 million. That's what I'd really like. Anyone out there want to buy a Lifetime subscription to my blog for $5 million? If so, don't be shy. I'm here waiting.

Wow, $5 million. I could really live on that kind of money. Not that I'd waste it. I'd hate to rip through it and have to keep writing for a Lifetime subscriber on fumes. A bunch of it would go to taxes. That sucks. But what might I end up with after taxes, maybe $3 million? That'd be enough. I could make my garage into a suitable writing suite. A new couch, some tapestries.

There's a big question: Would I favor my Lifetime subscriber over the others? I'd try not to. But it'd probably be like fishing. If you have one enormous fish, it makes the others seem puny. Plus, like I just said, the others would always have the option of coming and going. The Lifetime would be locked in. Someone who'd buy a one day pass, those folks are like insects that hatch out and die in a day. What a life! One-Weekers aren't much better. Like lightning bugs, a big blaze today, then dark tomorrow. You figure they're signing up at such a miniscule level because money's iffy. How can I build my life on such a shaky foundation?

I can only imagine the many excuses they'd come up with for dropping me! "Cable TV went up again." Yeah, we know, cable TV goes up every month, like clockwork. Remember when it used to be the cable company had to go to the city and get special permission to raise the rates a dime? Those days are gone forever. Now it's 10 bucks more every month. That's another reason for someone to lock in their rates with me -- $5 million for a Lifetime -- because they'd have it for life. Unless, of course, I had a proviso allowing for a rate increase after X number of years.

The Monthly and Yearlies are not really that secure either. As to the Yearly, his subscription of $33,599 is a good chunk of change. But what if I became dependent on that, as would be very easy to do, then I lost him? Talk about being left high and dry! The obvious answer is to have so many it didn't matter if I lost a few. But there's no guarantee of security. I'd still have to be frugal, I'd still have to scratch.

I could really use a Lifetime subscriber... Then if I did have $3 million left, I'd take care of it as best as I could. Even with low interest rates, I'd still make tens of thousands a year, equivalent to several Yearlies. Prosperity and comfort would be mine, and I'd daily slog out blog posts to keep him happy.

So the conclusion is, yes, if I had a Lifetime subscriber, even though he would be locked in, I'd dote more on him. That'd be my constant bread and butter, till one of us died. If he died, I'd still have the money. Or if I myself died, that'd be it. My family would know I had all this money. I'm laying there dead, at the funeral home, with a chair right up front for my Lifetime subscriber.

The lesser subscribers could take care of themselves, or not even be invited.
Posted by dbkundalini at 10:21 AM