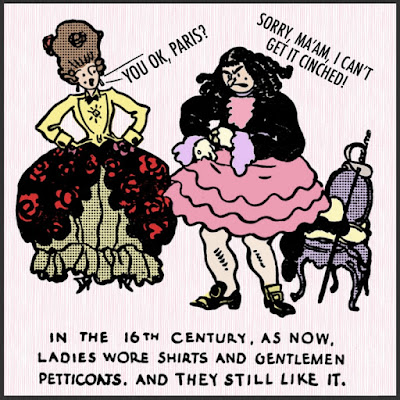 I’m a big fan of gender fluidity, which doesn’t necessarily have anything to do with fluids, although, ultimately, it always does. It’s one of the kinks, pleasantly defined, no judgment, that makes the world go ‘round. Face it, if it weren't for a little backwash now and then, none of us would be here.

People feel it, want it, choose it, are chosen by it. They're glad to go along for the ride, which whether it involves their choice or essential identity -- temporary or permanent -- is a good ride. Three cheers to you! You look great, you are what you feel, more power to you, you’re beautiful, you’re handsome, whatever your basic identity, let it all hang out. There’s certainly nothing wrong with it, I'd say. It’s somewhere in the biology. We are what we are, naturally, but what we genuinely are isn’t always defined by outward appearance and social categories.

OK, but this isn’t a college paper, instead a blog this month on self-abuse -- a lovely term that we should never let go, though it's dripping with someone’s judgment. Which isn’t a bad thing, I hope we agree, because boundaries are useful, because how can you cross them unless they exist? I'm saying gender fluidity is normal, but you might want me to condemn it because, “Forbidden fruit is the sweetest.” Most people, friends and lovers, want a little kink. I get that, I know the scope of things.

My own opinion is it’s perfect normal and healthy, but you might still want to keep things in a category of their own (with all that entails) so that, like self-abuse, there’s some edge to it. Grandma’s underpants stashed under the bed, anything... Keep your fantasies, keep the edge, don’t let it slip away into pure boredom, unless that’s what you're after, a square peg in a square hole, nice and tidy, six of one, half a dozen of another, Jimmy Durante, “Goodnight, Mrs. Calabash, wherever you are!”

Speaking of grandmothers and Jimmy Durante. I had a great grandmother who died before I was born. But one of the stories was she had Jimmy Durante’s picture on the wall and turned his face to the wall whenever she got dressed. That’s a kink right there, and while I find it funny it’s still a powerful thing. Dear old great grandma probably hoped Jimmy would find her one day and talk her into dropping her bloomers. “Turn my picture around, will you?” he says with some mock-irritation, "Well, we’ll just see about that!” And suddenly I have unknown older cousins with a big nose and raspy voice.

But we're looking at the guys in bloomers these days, kind of a renaissance of the 16th century, which were heady times if memory serves. And being the beautiful dolls our families always wanted. Softness, daintiness, made up, ready for the ball, a princess without peer, a coy blush, pretty in pink, sometimes abused by the evil stepmother, belittled and made to clean the house, with each thing out of place being strictly punished.

Gender fluidity is a great turn-on. But there are many hidden pitfalls. One of which would be, you don’t want to get caught, and yet if there’s no danger of being caught, where’s the kink? Whether it’s truly your identity or a temporary guise -- it's all-consuming regardless -- it’s a great thing in the rich annals of self-abuse.
Posted by dbkundalini at 6:00 AM