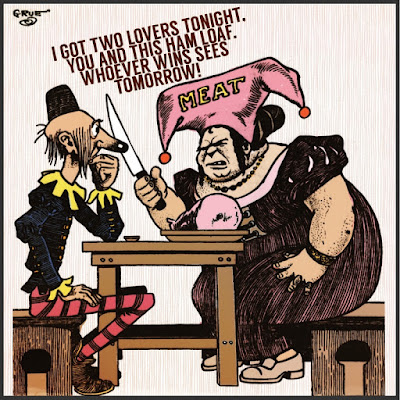 The story of this meat monster lady was covered locally but as far as I know was not picked up by news sources outside the county. Why that is, I can only guess. I suspect it has to do with the meatpacking industry and their “in” with journalists, always giving them meat to kill negative stories. And it's true, if you’ve ever visited journalists at home, the first thing you notice is the stand-alone freezer and plenty of meat. Which doesn’t just happen.

So I’ll sketch it out and hope you believe it, because every word is true and easily found in reputable dictionaries. OK, the meat monster was a mentally disturbed lady -- as generally understood --  with a side issue of being overly abusive to innocent ham loaves. With a prejudice. And say what you will about these conditions not being her fault, something she would've never brought on herself, that tired excuse only goes so far. She knows the value of a decent ham loaf, so she's fully capable of discerning right from wrong when it comes to killing lovers. The only mental issue I see definitely is the incongruity of thinking a lover's performance can be judged by the same standards we use to evaluate ham loaves. On that point I won't budge.

Our first victim (the other guy tomorrow) is this guy Glen with the penis nose, who actually should be head over heels the front runner in love-a-thons. If his downstairs is anything like upstairs, he's got an immediate advantage in any romantic standoff. Yes, he's of small build, but if he plays his body right, he could take care of her from both ends, depending on how her midsection fits on the mattress when spread-eagle. And were he to throw his voice, and with a nose like that he probably could, she’d think it was a menage a trois, which, if my French holds, means he’d be nailing her once but equivalent to the skills of three men.

Obviously, though, he had concerns, a downer most guys get, whether or not their nose is hung, when confronted with a woman as tough as Barbarossa and built like the proverbial shithouse. Part of her menace is the hat, with the word MEAT stitched in gold, again similar to Barbarossa, his crown.

Glen started back with a fear so real that had he fled in terror no one would’ve blamed him. But as she set out the terms, he froze. Whichever lover of the two -- Glen vs. Ham Loaf -- prevailed would see tomorrow! Glen went first, which wasn't too great but, frankly, a normal person would’ve given him a passing grade while not desiring sloppy seconds. The ham loaf went next -- it’s always best to go second in these kind of standoffs -- and it took full advantage of Glen’s blood, sweat, and tears in paving the way. With the ham loaf winning. Fully nude except for the hat, the monster woman strode over to Glen, and ... I'll just say his outfit's at the thrift store if anyone wants it.

We mourn Glen, of course, but sincere congratulations to the ham loaf.

Self-Abuse Challenge: Mentally put yourself in Glen's place.
Posted by dbkundalini at 6:00 AM