Whip The Bastards Out 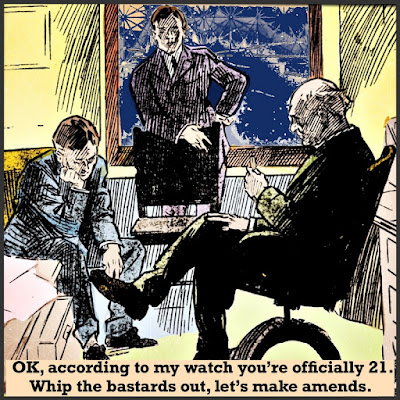 Here’s an story of a fairly illicit relationship -- the school manuals forbid it -- Old Mr. (teacher) and two young students, both close to 21, so old because years before they'd been held back to repeat Kindergarten, 1st, and 2nd grades. (There's a blurb about them and their dubious achievement in the world record books.) Old Mr. walked into a semi-private dark section of the hall and caught them both in the act of self-abuse, in flagrante delicto, as the Latin calls it, which means something like “with each other’s business flagrantly in hand and diddling with delight, possibly involving the tongue.”

Of course he scolded them mercilessly -- cussing them up one side and down the front -- with a lot of strenuousness, really all the scorn he could muster, because, let’s face it, this is huge shocking stuff. Anyone would be disappointed and even perplexed, and in this case he had enough righteous anger to pour it on at some length, laying it on thick and with fully justified condescension.

Well, Old Mr. couldn’t be everywhere at once, so he assigned them to the buddy system, to monitor each other and keep each other accountable. Which went great for a while, but I'd say it was predictable (like moths making out over a candle) that since the act they engaged in was the desire of each, what was to hold them back from an ongoing alliance? There were certainly tails told out of class. Meaning nothing could hold them back, so they were right back at it yet again, laying it on thick with each other, then thicker yet.

But the guilt -- such brutal overpowering guilt -- got the best of them and they decided, "Being equally guilty we should go tell Old Mr. even the randiest details of our sins and seek undeserved absolution." When, what do they find, but Old Mr. himself so completely oblivious to his surroundings that without interruption they were able to witness a full program of sexual wantonness. Another case of up one side and down the other. He had both a Mademoiselle and Lady’s Day magazine and was simultaneously going through them while self-abusing first atop the piano, then by the fireplace, then sprawled on the table in the teachers' lounge, then in the teachers' kitchenette while juggling knives yet never missing even one sooooooothing, sennnnnsuous stroke.

Suddenly, then, a good half hour into his raging act for the ages -- the choreography was impeccable -- he noticed the students standing there. Oops! His rather daunting full-length doodad quickly shriveled to nearly nothing. And he knew he’d been had, that old hypocrite and reprobate. But in the spirit of making it up to them -- not as commendable as it sounds under the circumstances -- and wanting to make the most of any hard feelings, he said to the guys, “OK, boys, you caught me, and I know what you’re thinking...” Then he waved and looked at his watch and in the spirit of the moment said, “You’re now both officially 21. Whip the bastards out, let’s make amends.”
Posted by dbkundalini at 6:00 AM