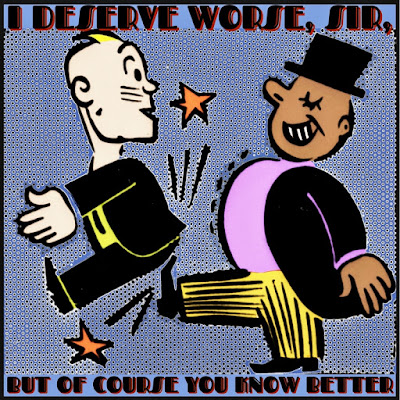 This one is mostly for other people into this kind of thing. I don’t have much experience with being mistreated physically (or during play). I’ve suffered mentally more than anything, which I covered a few months ago in my guidance counselor series. Of course it's all ancient history and he’s dead. My only recourse against him now, and associated therapy, are monthly road trips to the cemetery. It’s about a five hour drive one way for a good long piss. Which seems like a long way to go -- and on top of that it’s only his cremains! -- but it keeps me sane.

On the bright side, the farther the trip the more coffee I can drink, so it’s more worthwhile than might appear on the surface. My real hope is that Medicare will start covering private plane flights, since I haven’t found a direct commercial flight to that particular cemetery. They wouldn’t even have to turn it off. I’d run in, tinkle, and be back home in no time.

The graphic of the guy kicking the crap out of his partner has some interesting sexual aspects. The more interesting aspects of any graphic are psychological and you have to feel for the guy. Having to tell the supposed dom that he’s in charge and what to do. “I deserve worse, Sir,” that sort of thing. The Pink Vested One putting his foot to the unruly bottom under his command stands for the underling hinting around, “Uh, you’re not doing it right, I deserve worse, sir.” Yes, he probably does deserve worse, but if it takes telling him, maybe the other shoe should be on the other bottom. Putting pink wuss in his place!

Then comes another hint, hoping not to disturb whatever understanding they may have had before -- and to me it looks tentative and more wished for than a reality -- “But of course you know better.” Does he know better? Maybe, but our kicked friend’s calling the shots, not the other way around. You can objectively tell how lenient he is, it rates only 2 stars on a 5/6 star scale. Which, I don’t know, I’m not that into pain, doesn’t sound terrifically brutal. Worthy, I guess, of hinting around. “Do you mean business with my business or are you just pussyfooting around? Do I need to send you out to pasture, blacklist your name in the community? Exactly what do I have to do for you to take damned control here and give me the kicking of my life like I deserve?" The guy, not me.

But who knows? Maybe violence is out these days in sex play. I can see how it’d just be a relationship thing, a few slight taps and that’ll hold you. But there’s plenty of people -- I believe -- who want a lot better, meaning a lot worse. If that’s your fantasy today, picture me, a stern look on my face, mopping my brow as if to say this is going to hurt you more than it’s going to hurt me -- the things I have to put up with, you very bad boys, very bad girls. Despicable. I’m so disappointed in all of you. If I want something done, I have to do it my damned self! You're worthless! And I don’t wanna hear a peep out of you, got that? Shut up!

Self-abusing yet?
Posted by dbkundalini at 6:00 AM