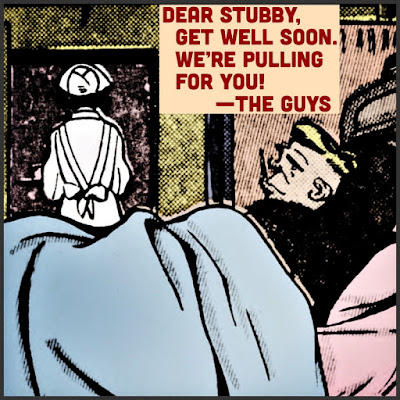 It’d be great to have a lot of camaraderie with a group of friends, I’m convinced of that. But it’s still not for everyone, like me, who’s so into privacy, I’d hate to be searched with eye contact for when I’m lying. Since once you start fidgeting, the jig’s up, you’ve been found out, you’ve been had. Then the group -- little more than savages -- passes you person to person for whatever depravity they have in mind, everything from stealing your chewing gun to depantsing you and throwing you in the river.

Whoa, depantsing, I haven’t thought of that as a real thing for years. But I still have it in my vocabulary, because that was a real thing when I was a kid. You get enough guys mad at you and they’d literally depants you on the playground (or worse). And of course you hate it on the playground for obvious reasons, since everyone’s in on it everyone has an equal chance to deny it and escape punishment. Of course you’re not going to name names or the penalty after school would might be depantsing and maybe burning your books. They might even stick your pants on the bull in the field, and in his fury and desire to escape he’s rubbing his horns up and down the bark of a tree, trying to depants his horn. Leaving, once you retrieve them -- going through a field, incidentally, littered with thorns -- you showing up at home with a pant leg on one side and your bare ass on the other! Bittersweet memories.

Still, if you could set the guidelines liberally with this one conservative rule, No Depantsing, it’d be great to have a club of boys/men, the Old Boys’ Club let’s call it, to cheerlead you on to greater and greater conquests. Shooting The Moon, Laying It On Thick, Gentlemen’s Stroll, You’re In The Army Now, and other techniques of quality self-abuse. I actually had a hand in formulating the various moves in You’re In The Army Now, so when I’m at patriotic events and they ask the veterans to stand, even though I never served conventionally, I’m still well-known as the Soldier’s Friend and feel no embarrassment standing and even cheering my own Division, being its only member. Let me reenact it briefly: Attenhut! O soldier, let me massage your neck. Umm, you're coming to attention, big boy. And so forth, I hate to show off...

Stubby here, even though he’s been sidelined a while from his group of friends -- we're sick too, just in a better way. But he'll soon mend and leave the hospital behind. Until then, he knows everyone's pulling for him. One further note, perhaps when the doctor comes in -- say it’s a guy and therefore understanding of such things -- he might bring up his nickname, Stubby, and see what can be done about that. But it’s not necessary. Stubby is still a pro, nothing's every that bad. You still have a lot of friends. Those more gifted feel better when you’re around. And those less gifted also feel better around you, because what you have is attainable by them as well and not as tricky to achieve as what the first guys have, who only feel bad when they’re around male farm animals.

Stubby, if you're reading this, I think there's a few nurses up on the latest moves -- wink wink -- know what I mean? Something for your thoughts when you're alone!

Get well soon, spring to life, whatever's standing against you, we know you're gonna beat this thing.
Posted by dbkundalini at 6:00 AM