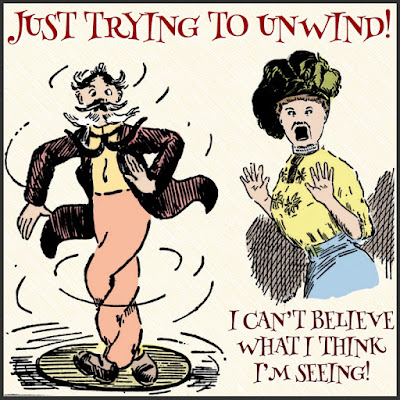 Some marriages are very open. Not that I would know personally, being the world’s oldest bachelor and at this point not looking. But I’ve known a lot of guys, and since they know I have a listening ear and discrete mouth -- keeping their secrets, not to the grave yet but it could be anytime -- they tell me what’s going on.

And what is going on? you’re wondering. Well, pull up a chair -- quick! -- and promise me you won’t tell another living soul. Tug your thingie and hope to lose it? Join pinkies, brother to brother swear? Screw karma and all future prospects for a full and meaningful life if you squeal? Now point to your elimination system. Butter butter blister, yeah, I’ll take a fist there. ‘Cos that’s what’s gonna happen to you if... -- Swear it on a stack of Adam magazines -- ...if you so much as breathe a single, solitary, licentious, lascivious, objectively horny word of what I’m about to tell you... OK, I took the vow, too, but I have a special dispensation to squeal, by which I mean reveal for academic purposes related to the medical or psychiatric field. One-time privilege.

Well, you know Ted up the street? Past the Butler's place. Other side of the road, the guy with the bad fence, not overly protective of his place, the vandals always getting the best of him. That guy. Well, since he heard that I’m one of the world’s biggest experts in male sexuality, he’s been over here asking my advice what he can do about his old lady continually finding him, discovering him, catching him, and at times even tripping over him when going about his necessary (his opinion) fits and feats of self-abuse. This is a guy I just naturally take under my wing, the meek, the clueless, the easily trodden on, the hopeless, a guy with few gifts up here, or down here for that matter. I'm the Statue of Liberty on this stuff, "Give me your tired, poor, easily caught..."

I told him, Ted, The Good Lord gave you two heads, choose one and think with it. He pointed to his skull. I shook my head no. He pointed the other direction and I nodded, overlapping my lips like Grandma used to do when the answer was “Duh.” Then we dove into the full slate of lessons like I used to teach them in the clubhouse: Knowing Your Needs, Knowing Your Options, Being Tricky, and of course the biggie, Reading the Clock. Yes, it’s still true if you have wives or parents bugging you, 3 A.M. Is Still Your Best Friend.

Unfortunately, Ted was still somewhat hopeless, but by some miracle it all worked out. His wife came home from church early to give it one last shot toward his conversion, when, let’s say Ted was tied up in knots, so wound up and uptight that he literally screwed himself all the way to the basement. (In fairness, the floorboards were rotten.) The wife of course waddled down the stairs as fast as she could, a weird twisting gait. Bending down, she felt around in the darkness. And it was probably a miracle, but in trying to uncoil Ted’s legs she and he both became entwined, which jump-started their relationship right there on the wet floor. She went immediately from apoplectic to a'priapic. And somehow seemed like she had the equivalent of a master’s degree in foreplay!

I regret to say self-abuse for Ted is no longer Number One ... can't win 'em all. But for such an unexpected and rare thing, he's in the Book of World Records and Mrs. Ted also reigns as a top finisher. Hornier than I would've thought.
Posted by dbkundalini at 6:00 AM