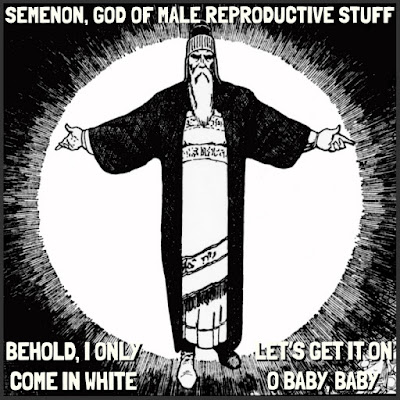 Well, here he is, the man himself, a god really, Semenon. I’m just going to trot him out for all the world to see. At this point, what’s the mystery? We’ve all been around the block, we know how it goes. So let's just get right down to the real nitty-gritty and not stand on ceremony. This is he, the antecedent, the seed itself, the impetus, the power to engines, turbines to speed that roars into the cave at night but is ready to leave on a minute’s notice.

Among the forces of nature -- the bubbling waves meet the beach, the knuckling under of roaring cascades, the purple headed majesty of mounting peaks -- against all of that, even the ocean comes in a distant second. For there’s power, power, wonder-working power in the flood of the limb, although it's something you’d never guess if you confronted him off hours, say, when his force sleeps, with nothing more on his (or his tool’s) mind than a midnight plea, “This really is abuse, let me sleep.” But there’s more to come.

No one has the final answer on the denouement except, naturally, Semenon himself. Whether our guesses shed true light, or whether it’s hidden from our grasp, without an independent, objective place to stand, we may never really know. My own belief is that the world is split into two essential divisions, the front side and the back. When there’s light on the front side, the back side’s in the dark. Then when the back side’s in the light, the front side rests. Of course none of this is final and definitive, because you might find you’re perfectly capable of going full force with the front side, a little self-abuse, only to learn -- dammit -- the backside suddenly needs to go. “Excuse me, dear, this won’t take a minute,” lick your finger, mark your place, and you’re off.

Do not doubt for a minute that Semenon -- “In so white, in so bright” -- can keep all the biology square. He knows your needs before you do! But he wants you to wisely coordinate your mind with his, to know the signals, when the time’s right and when you should wait. Who among us hasn’t jumped the gun and revealed Semenon’s glory before his time? You were excited, the inner man babbling such foolishness as “Sexiest dom in the world! Humpa humpa!” Semenon says, “You have one chance to get this right or get it wrong. There’s no second act. Think of gardening. Not planting, but the drudgery of turning the soil, carrying the buckets, yeah, that’s it, terrible evil work. Enjoy yourself, of course, but not to the point of desperation. Coordinate yourself with her moods, read the signals, and if she’s filing her nails you've been hitting it too much. But I believe in you, and when it feels right, I’ll let you know, and that’s when you’ll really go to town, roar down the straightaway, hit the game-winning home run, and shoot the moon!”

Then, of course, there’s solo flights, and that’s really what we’re here for this month. But in the end it all flows together as one, the same principles with company or just some bare assed knuckledragging schlub on his lonesome. It’s all in the synchronization, with the knowledge of when it’s right to set down the landing gear. Look to the master: Semenon is occasionally late but often early. When he comes he doesn’t retreat. Put everything you got into it, screaming, thrashing about, arching up, and of course that very dramatic moment of silence when you’re gathering your euphoria and making sure there’s not a piece missing -- in heaven that’s equivalent to a half hour’s silence -- just before everything is revealed in its full foaming, boiling over, glory glory hallelujah, yes, yes, eternal peace, eternal bliss ... eternal till tomorrow, (checking my watch) about this time, maybe a little earlier depending on game time.

My testimony, given by personal prerogative: Semenon made my teen years worth living.
Posted by dbkundalini at 6:00 AM