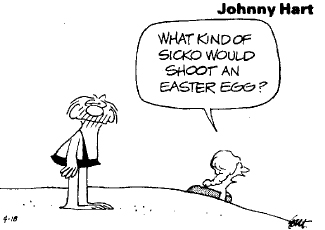 We used to get a lot of laughs out of the comic strip "B.C." and another that the same artist/writer, Johnny Hart, did with someone else, "The Wizard of Id."

It was the "Wizard" comic that had an especially funny character, a big nosed guy, I'm looking at Google images, it must have been Spook; it's been 40 years or more since we did all the laughing about it. Researching this topic right now, I see Johnny Hart died in 2007, and apparently the strips are still around. I basically quit reading the comics page, which, looking back on it, was about the time my Morose Period began.

But before that, way back when, B.C. was pretty funny, even though, if memory serves, there were some pretty lame themes, such as the guy looking up a definition in a book, or a couple of people insulting each other then walking over the hill together. I believe the definition theme ties in with what I'm talking about today, the deadpan look. The guy looked up a funny definition, then looked at the reader.

This is interesting to me, with the bond that exists between the character and the audience. We together -- he and us -- know what he meant, but the dumb person didn't understand, meaning we are amused/bemused or exasperated together. That person is dumb! I'll be more cautious of them next time! It takes all kinds!

I was out for breakfast with the Pink Professor today, and I made a pun about something, and he did the deadpan expression off to the left, like he was facing an audience. Maybe it's called "deadpan" because you literally pan over and have a dead (still) look. There's no rolling of the eyes, no hand to the forehead, no diddling of the lips and blubbering. As far as looks go, you have passed away, your exasperation is humorously and unmistakably conveyed.

Oliver Hardy did a deadpan expression frequently, looking directly at the camera to bond with the viewer over some stupid thing Stan Laurel said or did. This is not to be confused with the slow burn, where he had a greater reaction, only delayed. The deadpan expression was pretty funny when Ollie did it.

We're very engaged these days, though, so when the Pink Professor does a deadpan look, I call him on it, "Deadpan!" Meaning, of course, we get less deadpan expressions these days because everyone's an analytical cultural sociologist. Still, it's a natural theatrical thing, guaranteeing laughs.

But in the "B.C." comic strip, I looked at the deadpan expression ending as very overworked, even lazy. After a while, I didn't like to see it anymore. And the same goes, even more so, for the insult exchange and the two characters walking over the hill. That one sort of turned my stomach after a while. Still, if you're a cartoonist churning out a strip everyday, you have to come up with themes like that that are easy, I guess. It's understandable.

Closing this post, I'm giving you a deadpan look. Because someone somewhere just said something dumb, and I can't entirely believe it.
Posted by dbkundalini at 5:09 PM