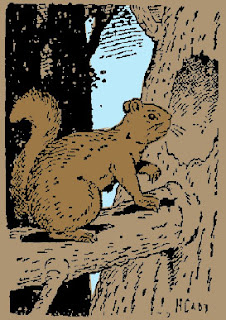 It's amazing to me how many squirrels there are, and how they're everywhere. I read a quote once somewhere that said squirrels are just rats with a cute tail, and if it weren't for the tail we'd never allow them to live. Probably true. They're kind of disgusting even as it is, since there's so many, and since you don't know they're not going to attack you.

I've been walking in the neighborhood, and sometimes I see five or six squirrels gathered close to the sidewalk. Since it's since a domesticated neighborhood -- very few of us actually hunt our food -- the squirrels don't appear very scared. They're wary, of course, and are prepared to dash up a tree on a second's notice, but they've learned, it seems, that human beings don't feel like grabbing them. But just get my dog Underbrush out there, and she'd gladly grab them.

I was at one of the parks yesterday, sitting in my car, and from there I was watching a few rabbits, one of which was eating the underside of a bush. Then, guess what, here came a couple of skinny squirrels. One was getting close to a small tree about eight feet from my car, and it was looking at me in a wary, vigilant way. I made a quick, low-key hissing noise and it darted halfway up the small tree. Nothing major, just trying to get a rise out of it.

Looking at the squirrels makes me think of the sense of individuality, and whether squirrels actually have it. It seems like they'd have to, since they seem to be concerned about their own individual hide, which goes without saying. All this is common sense. They have hunger, they satisfy it, etc., as individuals. But then there has to be a strong social component as well. I noticed these two squirrels, even though they weren't right there together that they didn't seem like strangers. Strangers would notice one another. So they're probably very used to each other socially, and don't even need to remark on the other's presence, because they're already one. Meaning one like the birds that swarm as one mass.

That there are so many squirrels, like everything else, says to me that Mother Nature spreads the risk to the species. If she made just one or two gigantic squirrels, they'd be hit by planes or couldn't find a tree big enough to sleep in and so they'd die. Raising the question how they got so big in the first place. That's the problem with the dinosaurs, they got hit by planes.

After bit, I'll be out walking again. And you know what I'll see. They'll be looking back at me. But this time I'll be able to tell them, I told the world about you on my blog, so you better watch out, other people might be coming around.
Posted by dbkundalini at 5:24 PM