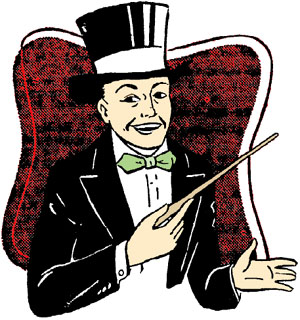 In honor of the last Harry Potter movie, I've been working on my magic. A few months ago I bought a wand, which when I'm not using I keep in the garage so it won't accidentally go off.

I've been looking for the perfect magical phrase, something of my own, full of power. Today, after an especially powerful brain spasm, I blurted it out, "Presto Contortionist!"

The magic I'm associating with this phrase is what I'll call localized shapeshifting. Meaning, the entire shape won't shift but just parts. Like if I aimed it at your face, somehow your mouth might rotate and go from its normal position up one side of the face to the forehead and down the other side and home again. A lighter dose might make your nose move back and forth a few times.

Now that's contortionism! But I'm bothered by the idea that the mouth isn't just an isolated organ. It's attached to a tube that leads down the throat. How it's supposed to go up to the forehead without the tube behind the face getting tangled up in the nose apparatus or interfering with the eye channels, I don't know. It could be people will have to die before I perfect it, which is sad, but that's the price of progress. Something easier might be just making people's hair stand on end, then drop back. Or picking up a glass of water, making it hover over the head, then tipping it for a good soaking.

I was at DQ thinking of this, and letting a straw stand in for a wand. Of course I tried the moving of the mouth on a guy's head, someone across the room. "Presto Contortionist," I said softly. I got his mouth about two inches up, then figured I better quit. It was funny when he went to shovel in a spoonful of ice cream and hit his chin! Before he noticed what was wrong, I quickly moved it back.

I was imagining all kinds of wickedness I could do with this, like having people drool ice cream they just ate, making it come up again. Or something much more wicked (and violent), lifting someone up with the wand, opening the waste can lid, directing their head in, then moving the lid up and down, whack whack whack. That's mean, I know, and I would never do it, so that was just imaginary, unlike moving the guy's mouth, which really happened.

A great one for DQ that wouldn't be too violent but just mischievous would be to make the ice cream machine run about two seconds longer than it should, so you ended up with a large for the price of a medium. I know, technically that'd be stealing, but it'd create a lot of new jobs because they'd need to come up with magic-proof ice cream machines. Unfortunately, it'd also raise the price of ice cream.

I'll end with this, the combination of hypnotism and magic through your computer. Read this next sentence slooooowly: "You are transfixed by my words.... Relax, relax... Now let your entire face relax, let it go completely limp, let there be no resistance... PRESTO CONTORTIONIST! ..." Sorry about that, your nose just fell on the floor. Better get it before the dog does.
Posted by dbkundalini at 5:35 PM