Death Is Always The Answer 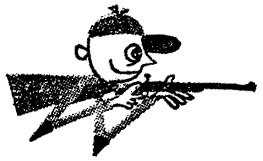 I know it sounds terrible to say it, but my answer to most fictional dilemmas is death.

I need to qualify this statement in a couple ways. One, to emphasize fictional. My answer to most non-fictional dilemmas is not death, but working through things in a reasonable way. Two, I'm specifically dealing with fictional dilemmas that are already touching on a theme of deadly force, such as a shoot-out or a mortal threat to the good guy.

In real life, death is a nasty business, thinking of murder in particular, or even killing in self defense, although this is obviously more justifiable. If you've done wrong, you've got an army of investigators who are likely to catch you. Then you end up in prison for four consecutive life sentences, and that's surely never easy to deal with. Plus, there was probably an alternative way to deal with your problems, such as putting distance between yourself and the enemy of the moment. You might report them or get a restraining order, or move away. Every little thing doesn't demand death.

But in movies or TV shows and books, I really can't think of a tidier way of getting things squared away. Good versus evil, good kills evil.

This conviction came to me years ago when Batman was on TV. You might remember, they had two episodes every week. The first night, Batman was always in mortal danger in a cliffhanger. The next night, he escaped through some tricky maneuvers, usually involving something he had packed in his utility belt. When the villains had him tied up, or dangling over boiling poison, whatever it was, they invariably left the scene, assuming Batman would be killed. I was saying then, and I'll say it now, if you want to kill Batman, you need to stay and make sure you do.

Then, reversing the roles, with Batman capturing the bad guys, I always said the same thing. If the Joker tried to kill you, you kill him. Meaning he doesn't come back three weeks from now, because he is absolutely and completely, certifiably and reliably, dead. The Penguin ... if I'm Batman, Penguin gets one crack at it, then he's offed. Not a warning, not winged, but completely snuffed out. We'd spend the entire second episode toying with him, maybe, and he'd be thinking Batman is going to leave so he can escape, but it just wouldn't happen. Penguin would literally die.

There's a problem I've seen in some movies, even if no titles come to me now, where the bad guy is shot. But the shooter leaves the scene and the enemy eventually wakes up and is able to crawl away. No, no, no. You empty the clip, you run to Walmart and buy more ammo if you need it, and you finish him off. It might not make for a very suspenseful movie, but that's not my problem. Evil must die!

How about this scene that we've seen repeated a million times? You're the good guy, and you've got your gun on the bad guy, and the bad guy's talking, getting near you, then knocks the gun out of your hand? That should never happen. If you're the good guy and you've got the bad guy where you want him, bang bang bang bang, he's dead. No farting around about it. I roll my eyes when I see one of these situations, thinking, How dumb can you be? Just kill the guy!

I just watched a movie starring Edward G. Robinson, "The Woman in the Window." I'm going to leave out the ending because it kind of negates what came before. But let's take everything that came before as absolute fact. In self defense, he kills the guy who comes barging in the door attacking him. Then he goes to call the police, but thinks better of it. He's in another woman's apartment, his wife is out of town, etc., so it could be embarrassing. I would've never done that. Once I've killed the guy in self defense, we immediately call the police and deal with the wife as well as I can.

It goes on from there. He's disposed of the body and thinks no one else knows. But there is a blackmailer who has it all figured out. Edward G. Robinson says there's three ways to deal with the blackmailer: 1) Pay him and know he'll always be back. 2) Report the whole thing to the police, negating the guy. Or, 3) Kill him. In the movie you think, he's already in serious trouble, down for one apparent murder, he may as well kill him. And it almost happens, with meds mixed in a drink, a good plan if the guy had been thirsty. Otherwise, the first guy died easily enough with a few scissors stabs, and you've still got the scissors... I personally would've gone for No. 2, confessing the whole thing (but that's what I would've done originally.)

Just killing to be killing is of course nothing I like in movies. People who do that I call the bad guy. I'm always for the good guy, or the lesser of two evils. I like to see good prevail. I like that in real life, too. The answer in real life is to work through your problems. Killing someone is usually going to make your life worse. For that and other reasons, I say, Don't do it! Death is not always the answer.
Posted by dbkundalini at 4:55 PM