On Trial In The Shower 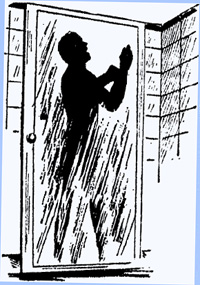 There's lots of activity in the shower, and not just the usual stuff of scrubbing here, scrubbing there, soaping down my recent bug bites, washing my pits and bits, shampooing, etc.

Most of the activity involves the outside world impinging on my privacy, because to a certain extent I can still hear what's going on out there. Like if a big truck rumbles by the house and shakes something, or hits a pothole and goes airborne, with the cargo shifting to the point that the guy might lose control and go in the ditch.

I'm showering and trying to gauge all these noises for their distance and what else might be happening. When you're in the shower you're very vulnerable. It might have been someone knocking at the door, and hearing nothing, assuming you're not home, and if they happen to be a burglar, they could be breaking in, not to be discovered till I get out of the shower, at which time I would be in big trouble.

It's all running through my mind, I can barely enjoy the shower. If he gets spooked, I might get shot. Or, more positively, he might run and dive through a window; that's happened to me before. I'm thinking of the trial. Obviously I didn't do anything wrong ... or did I? I could've taken my shower earlier, before anyone got up, and thereby prevented the burglary. Maybe the judge will think I'm in on it, conveniently taking a shower when I did, implying I had my stuff stolen so I could collect on the insurance. It's been in enough movies, it's a believable scenario. And while, just between you and me, I wouldn't do that -- it's tough to imagine myself doing such a thing -- the fact that I'm thinking of it in the shower means I might look very guilty if called to testify. 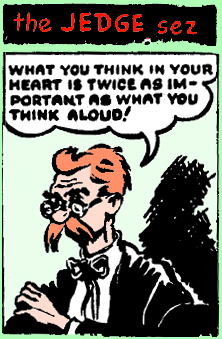 Guilt and a guilty look are funny things. If you're really taken by surprise with something, it's not hard to look innocent. But if you think too much, you might really look guilty because you've imagined that very thing. And you know the number one suspect is always the guy right there close to the scene, you.

It get complicated further because burglars also know that, and he might show up pretrial to blackmail me with something, meaning either to get me in trouble with him or for me to drop the charges. But how could I do that? It would mean I'd be lying, like if I had to say he was an old family friend, and it would be clear I was lying before when I said I had no idea who he was, which was the truth. So I'd be in a ton of trouble, thanks to nothing else than being the guy's victim in the first place, and thanks to thinking too much about it, and thanks to being in the shower when he came.

Still, burglars hardly ever show up. I can't even see why anyone would be a burglar these days, thanks to all the video cameras, DNA, satellites, and the whole bit. They're able to keep track of us pretty well if push comes to shove. They might not check all the information at their disposal for a low-level burglary -- they didn't check it at all when I got a dent in my car at Walmart -- but they could if they wanted, like when someone's kidnapped. Then they check the video camera at every motel, gas station, bank, school, and parking ramp till they've got the guy nailed. They could do that with burglaries, too. So why would anyone be a burglar? Because he could still get away with it, as described above.

Or, you could be a burglar and be very baldfaced about it, to the point of not running, not diving through the window, instead just sitting calmly on the couch and saying, "We can do this the hard way or ... the easy way." In the negotiations, he spells it out that you have no recourse but to shake his hand and bless him as he leaves. Why should you be dragged into an insurance fraud case? Just dry yourself off and be more careful next time.

Now, let's say I did go ahead with the case. I'm in court and the judge might ask, "When did the accused show up?" I take it that he's accusing me of letting him in. How am I supposed to know when he showed up? And I'd have to say I didn't have any answer because I was in the shower. Then I remember, there was a truck that hit a pothole and sounded like it was about to go in the ditch. That was about five minutes after I got in the shower, and since I started worrying so much about burglars, I got out about five minutes after that and there he was

The judge sees I'm struggling and points out the truck incident is immaterial to the case, and accuses me of using a smokescreen to hide my own guilt. "Ten years in prison!" Forever! Where the showers are right out in the open, 14 on one wall and 14 on the other side, surrounded by burglars and other victims, going at it, their showers.
Posted by dbkundalini at 4:20 PM