Unveiling The March Of Vigor Vivus 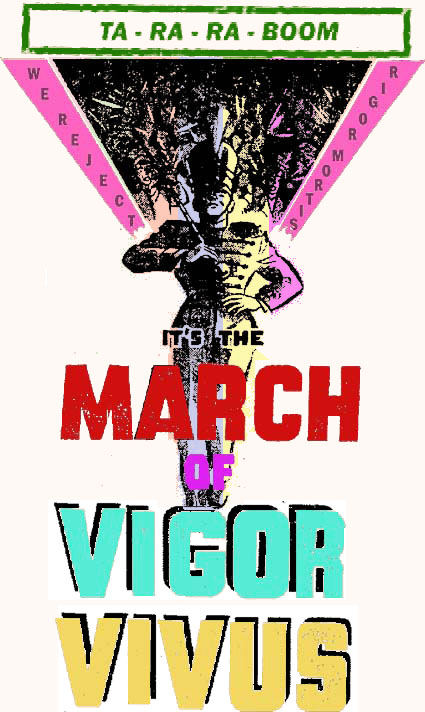 Today, I'm unveiling this stunning new graphic that I'll be using to promote a series of talks I plan to give on "The March of Vigor Vivus," as I teach some of the principles of life in abundance. You've been following my posts on Vigor Vivus vs. Rigor Mortis, and so you've had the first taste (and a free one at that) of this exciting new teaching. As you recall, Rigor Mortis is the life of death, submitting ourselves to lack and limits, not really living. But Vigor Vivus is its exciting opposite, claiming the fulness of life as yours here and now and forever!

Just a word on the above graphic. Most of the graphics I feature on this blog are things I myself have come up with. But thanks to me making around $1,000 on Google Ads (with my other blogs, since there's no advertising on Grandma Slump), I decided to go with a professional graphics house. And this is what they came up with. I told them I had $1,000 to spend and, by some weird coincidence, that's what it came in as.

I said I wanted something that conveyed the sense of Vigor Vivus being something on the march, and with that to make it colorful and exciting. Of course I supplied the slogan "We Reject Rigor Mortis," but they somehow came up with the inspired "Ta-Ra-Ra-Boom" all on their own. In my opinion, they completely nailed it, with the bandleader or drum major guy being just perfect for the concept. After all, who in the band, who on the football field, gets out front as much or kicks as much as him? The rest of the band is concentrating on their music, ever staring down at the little pages, basically navel-gazing, but not the major. He's the showman of the group, whistling and thrusting his stick every which way. It's great to watch.

The graphic, I plan to use it on posters. They gave me something of a licensing deal. The graphics place has some connection -- the same owner -- with a photo studio, like where they do people's portraits. And if you're familiar with their policies, you know that when you buy pictures from them they still own the copyright, and actually it's for a whole 75 years! So, just because you bought the pictures, you don't really own them. You simply get the rights to look at the prints, but on the bright side you can look at them to your heart's content. You just can't do anything else with them. So it is with this graphic. I am allowed to use it on posters advertising my talks but nothing else. Technically, even putting it on the blog I'm in violation, so maybe if you really like it, you'd better print off a copy, because it might be gone by morning.

As to how hard and fast the 75 year copyright is, it's anyone's guess. I figure the guy will be dead by then, probably in 50 years, meaning, if I'm still alive, I can do anything I want with it! Here's something to think about. I went and had my senior pictures taken before I graduated. But I didn't buy the pictures. So I got nothing. Then some decades later the photo place went out of business. But they asked what they should do with all the accumulated pictures of the years. The truth is, they called people's parents, then sent out all the negatives and proofs, whatever they had, for free. Meaning, I ended up with the original negatives. The lesson there, if you wait 25-30 years, you might get them free!

Anyway, I'm planning -- it's all in the planning stage -- to get out in the community and give a series of talks on Vigor Vivus vs. Rigor Mortis -- with the overall theme being "The March of Vigor Vivus." I'm assuming I'll be looking at interested groups like the Lions Club, the Rotary, the Moose lodge, the Oddfellows, the Masons, the Boy and Girl Scouts, the Teacher's Union, funeral homes, Sunday School classes, and so forth.

As to giving the talks, that might be a little tricky, because, if truth be known, I'm something of a shy introvert. I'm not a ball of fire. I get stage fright, sad but true. I can see myself being very nervous. I'm very withdrawn. It seriously might be that I'll have to sit behind a curtain so they can't see me. Then I'll be sitting at a desk, reading my prepared remarks. I'm also very sensitive. So there's the danger that if anyone grouses about the arrangements I might just call the whole thing off. Or if I hear anyone snickering, or too much coughing, or other people talking, etc., I might completely lose my cool. But if I do, at least I'm behind a curtain, and if it gets real bad, I can just disappear out the back and leave.

The key thing is not my many hangups, but the spirit of life that indwells and motivates me, giving me the great gift of life in its fullest abundance, the life of Vigor Vivus ... Vigor Vivus, it marches on, ta-ra-ra boom!
Posted by dbkundalini at 3:11 PM