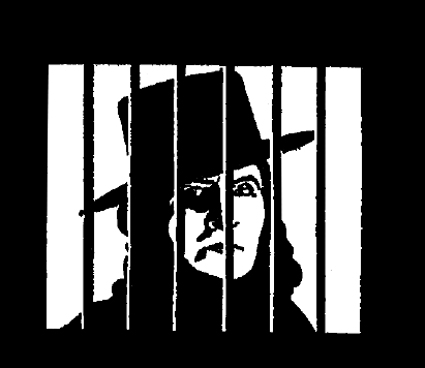 Mostly his thoughts are just blah. One day leads to another, then he's up with the sun for yet another basically unpleasant day.

But between "one damned thing after another" he's got some time for daydreaming, silence, even whimsy. Until there's a maniacal scream down the cell-block some place breaking his train of thought. It takes a while for everything to settle down, but when it does, he lets his thoughts roam again.

In those moments, he's usually thinking of home. And getting back home, if only he could. It's like in the song "Green, Green Grass of Home," a beautiful place full of great memories, a place he'll probably never return to, except to be buried, like in the song.

His memories reach back over the forlorn divide of time, a terrible gap, a break that should never have happened, except, well, it started out as a normal bar fight. Then somebody killed a guy. He tries to put it out of his head, and tries to think again of home.

He pictures the old barn, red and weather-beaten, once full of hay. Those were hard-working days, with his arms being scratched like crazy putting it up, so the animals might eat. There's the old corn crib, where corn was kept. He remembers the trouble keeping rats and skunks out. You shoot a rat, it's different from shooting skunks, because the odor can linger for a couple weeks.

Then, back at the house, Mom would be fixing popcorn and fudge, the family's favorite treat. It's hard to believe she was younger then than he is now. Still young and vital, and Dad was too! Time is a funny thing. It didn't take long for them to age, thanks to the passing years, and of course he wasn't any help with his misbehavior.

And now Dad himself is buried beneath the green, green grass. And Mom's at the nursing home, maybe looking at her door and wishing somebody would come through it.

He thinks of his old room. Upstairs, it was. With his old balsa airplanes he used to hang with fishing line. He pictures his desk with its very familiar scratches. He used to daydream and lose himself looking at the scratches. He remembers his old wallpaper, showing the pattern over and over of a fisherman's creel, rod and reel, and lures.
Posted by dbkundalini at 2:41 PM