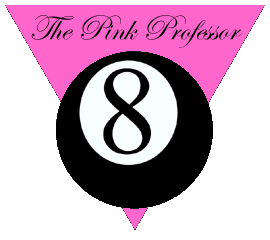 I'm always interested in people getting along better and having good friendship. And my friend the Pink Professor also has that as one of his goals, which he's able to accomplish in his work at the Roadhog Roadhouse, a bikers bar and grill.

You might recall, sometime back my friend took on the Pink Professor role typical at bikers bars, though qualified men are still in high demand. What was different about him was how he just showed up one night and worked himself into the role, just by his good nature. He has the gifts it takes to soften the otherwise very rough and tough atmosphere of the place, and that's what they want.

The trust everyone has in him comes in very handy when there's some kind of eruption, when the more base, ruffian elements of their nature start creeping back in. At those times, there's no one who can moderate or referee like a Pink Professor figure. That's certainly the way it was at the Roadhouse when the guy with the 14-piece pool cue showed up...

Almost every man who plays pool there uses one of the house sticks. They're not looking for the added nuance or class of a custom stick. But there's a few who show up with a two-piece cue in a case, and they always think they're hot stuff. Just imagine what happens when a guy shows up with a 14-piecer!

Well, it happened. A guy, who we now know was named John, came in and started making a general nuisance of himself. He was screwing around with the bartender over how good the drinks were, snotting off to the waitresses about the promptness of their service, and even singing loudly along with the jukebox. But his worst offense came when he was challenged to a game by Dirk, then went out to his bike and brought in a case with 14 pieces of a cue stick in it.

Now, Dirk is a guy who needs everything predictable and normal or he more or less loses it. And get a few beers in him, he's liable to go ballistic. He was ticked off when John opened his case and started putting his cue together. It was going to take him forever. First, he seemed indecisive about which piece to start with, but after some deliberation decided to go with the tip end. Then he rethought it, that it'd be more natural to start with the heavy end, where you've got the heft well in hand.

He had the base piece, then got the next piece. He started screwing it in and it squeaked. So he unscrewed it and spat in the hole, then screwed it again. He looked satisfied and nodded at his own expertise on handling a decent stick. Dirk was standing there with the commoner's one-piece stick, feeling a little inferior. John took the third piece. The screw went in crooked, meaning he couldn't cinch it. He struggled to loosen it, then guided it carefully, a bead of sweat appearing on his brow. His hands also were perspiring, so he went to the bar and got a napkin. Then it was time for the fourth piece, the fifth, the sixth, and so forth. Each one presented its own challenge, but John knew just the remedy to finally solve each difficult problem.

Dirk was looking like he might crap his pants, he was that pissed. Halfway done, John paused, because when you get to the narrower pieces, they're more delicate. He wanted to check out each one before attempting to screw them together, so nothing would break. It was quite an operation, a couple requiring spit, then a safe cracker's touch. John was being very careful with the treads. He wanted them cinched in, but of course the instructions say not to over-tighten. He had a few more pieces to go, when Dirk threw up his hands in disgust and called the whole thing off. Both men were suddenly in each other's face and it was all they could do to pull them apart.

The next night, the whole story was told to the Pink Professor. Of course Dirk was there, but no one had any reason to expect John, a brand new guy, to show up again, when who walks in the door? The Pink Professor greeted him in a friendly way and offered to buy him a beer, before telling him he'd heard about the cue and would love to see it. John was taken aback with his friendliness, but naturally he'd love to show it off. From start to finish, the Pink Professor expressed appreciation for the intricate pool cue's pieces, its sheen, its workmanship, its expense, and even the solid construction of the plain black case.

Dirk was listening in and muttering, still sore and nursing his wounds. The Pink Professor called him closer and sort of acted like he didn't know the game had never actually happened the night before. He started complimenting Dirk for being the first man in the place to take on a man with a stick like that. How brave Dirk was! What a nice man Dirk was for welcoming and taking a new man under his wing! Dirk has real class! If we only had more like Dirk, what a fantastic world this would be! The Pink Professor laid it on thick. In a few minutes, John and Dirk were arguing in a friendly way which one would buy a beer first for the other. They were fast buddies, with John letting Dirk take the case around and show everyone.

John also had a compliment for Dirk, confessing that he'd taken so long putting the cue together because he was a little worried that Dirk was a pool shark. He complimented Dirk's look of confidence. He confessed he could've had it together in less than five minutes, which he and Dirk now set about together to accomplish. Before long, Dirk was taking down the information on the stick, where to order them, their selling points, etc. The night went on like that, with a few friendly games. Neither man turned out to be a pool shark. Both of them had their technical failings, but everyone was generous, saying it was the beer's fault.
Posted by dbkundalini at 7:10 PM