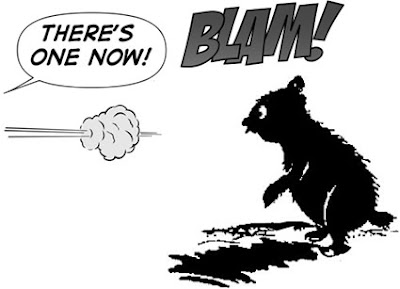 I don't want anyone to think I wasted my Groundhog Day holiday. I certainly didn't...

The night before, somehow I fell in with an interesting crowd, all men. I guess I had a little too much to drink. I woke up about 6 o'clock in the morning on Groundhog Day. I was in a strange place, which turned out to be a hunting lodge in parts unknown. I looked around the room and saw a bunch of guys sleeping, most of them in red flannel shirts and in various stages of undress. It was like either a nightmare or a dream come true, depending on how you swing.

Then it started coming back to me. I'd been at one of the local watering holes, playing darts and touching a few too many 25 cent draws. I hit a few lucky bulls-eyes and next thing I knew I was drafted by an all-men's darts team. Sitting later in a booth, one of them got breathy on me, real up close, about some "action" they were going out for. He looked around the room and asked me if I wanted in. I was reluctant, but then with a few more drinks, I was like, "Sure!" I was up for anything. All I remember next is a bunch of guys -- all men -- headed for the country, and I fell asleep.

OK, to make a long story short, as the old saying goes, it turned out the "action" was an all-male groundhog hunt. The best kind, I'd say. I woke up, found the bathroom and did my business -- No. 1 -- and a couple more guys came in. I zipped up quick, but one of them caught my eye. I guess I blushed. Whatever it was, he patted me on the bottom and proceeded to relieve himself, boldly, which he was still doing as I went out the door.

Over breakfast, the rest of them, most of whom I barely knew from the night before, were celebrating my dart playing, saying I put them over the top against the other team. They were all like, "You definitely know where the bulls-eye is!" and "You're no stranger to putting it where it goes!" and the like. I put my hands up, a little abashed, as if to say, "I got lucky..." I guess I was lucky, because here I was, feted by a cabin full of men!

One guy -- these guys were nothing if not bold -- came out of the shower with a towel around his waist and nothing else on. Everyone laughed, it was funny. I expected him to go back in a make himself decent, but instead he proceeded to the stove and started cooking breakfast. I watched as he separated each strip of bacon from three pounds and carefully laid them in hot skillets. He licked his fingers and leered over at us, still being funny. As the strips sizzled, he tossed his head back with a satisfied look.

The morning, then, was topped off by the actual groundhog hunt. Again, this was nothing but men, men with big long guns, shooting all over the place, at whatever moved. I saw a four-legged deer die. But the highlight had to be the group gathering around groundhog holes, sticking our guns down the holes, and blowing the crap out of them.

I skinned a groundhog and made a Davy Crockett hat. I was so excited, the tail hanging down my neck twitched and flipped up whenever one of the guys came up behind me. There's something about the nerves in groundhog tails. It's like a corpse's fingernails growing, their tails twitch even when they're dead!
Posted by dbkundalini at 5:08 PM