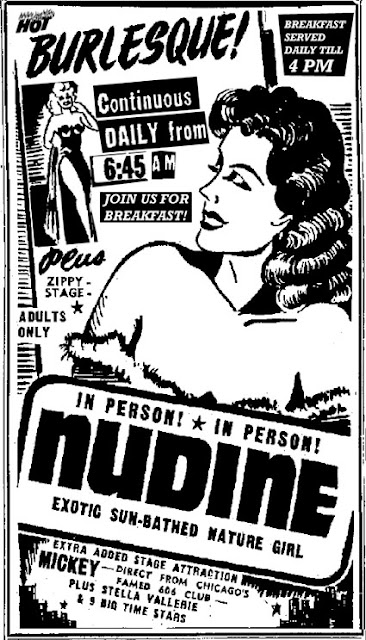 This post contains information I did not personally witness. I got it from a guy I know who goes to see strippers and freely admits it. I myself would never admit it. Because he's so truthful in that respect, I vouch for everything he says as absolutely true. Plus, he's my agent for car insurance.

According to this guy, one of the clubs has a particularly vivacious stripper named Nudine. The interesting thing about her is that she's so vivacious she's even known for telling guys their fortunes. That's the part that made my ears perk up and made me listen. And the weird thing is Nudine herself appears completely passive in how it works.

It goes like this. A guy wonders about some choice he has to make, then looks at her, then immediately, or in some cases later, knows what to do. Why there would an immediate answer or a delay seems to have something to do with the particular individual. But we think it also has something to do with Nudine's power, how strong or depleted it is.

Of course I asked for examples. At first he didn't want to say. It was like he was afraid the walls had ears, know what I mean? But I pressed him until he waved me outside, beyond walls, beyond doors, beyond ears. We were over by some very bare bushes, denuded by winter and obviously not hiding any electronic surveillance equipment. I could only try my best to remember whatever he would tell me, lest I forget.

And this is it, some of it: There was a guy who had a hard time deciding how he wanted his eggs fixed. The club has a fry cook in those early morning hours as the guys are being entertained. One day, this guy being perplexed, he glanced over at Nudine in dance, as she faced him, and came at once to a decision, sunny side up. Then it happened again another time; Nudine was on her belly doing a "rug act," and he knew he'd have them over easy. Uncanny but true...

And that's just one guy. Others have testified of receiving lottery numbers, psychiatric treatment, spiritual counsel, and even career advice after watching Nudine, as beautiful as she is and so lost in reverie. At this point I was a little skeptical. But my friend led me further on, till we reached a bush with even less foliage. Here he spilled his entire guts. He was the guy who'd received career advice from her. She was over against the east wall of the club, rubbing up against a hanging shag carpet for a prolonged time.

Suddenly he felt compelled to drive east. To make a long story short, he stopped in a coffee shop to think over the situation. He sat in a booth for a prolonged time. He struck up a conversation with a guy with shaggy hair, who turned out to be the regional rep for a major car insurance company. Who told my friend they had some great openings as agents. They hit it off so well -- the rep also likes strippers -- he was appointed an agent right on the spot. All thanks, once again, to Nudine.

But what about the lottery numbers, psychiatric treatment, and spiritual counsel? We left every bush behind, and now being in a vacant field -- nothing there at all but fresh snow, not a single track -- he raised his hand and swore it was all a fact. Indeed, I had to believe it, Nudine does it all!
Posted by dbkundalini at 12:04 PM