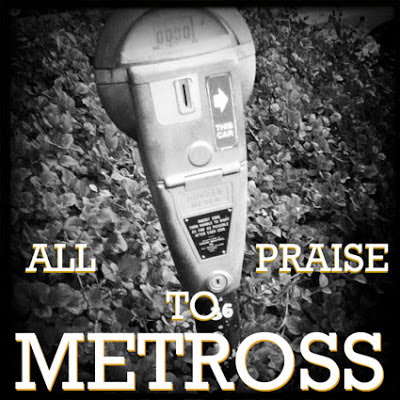 I really hate to say anything about Metross, but I'm a little stuck. I seriously needed a parking space today -- downtown was very busy -- and in my prayer I blurted out rashly that I would "proclaim Him" in exchange for a space. Of course, one immediately opened up, and now I realize ... I have to hold up my end of the bargain... or next time I'm in deep doo doo.

But maybe the less said the better. Because the more people who come to believe, the tougher it might be for me to get a space. Although, now that I process this conundrum, it stands to reason that IF Metross is so powerful (my IF not implying lack of faith but only prompting me to praise Him more) then even if everyone in town hears of Him, still parking spaces would automatically open up for me. So I feel better.

OK, like I said, I was downtown today and went to one of the lots that is notorious for having very few available spaces -- being Sunday and everyone going out to eat. I thought, Yeah, I love putting my faith to the test. I got there and it was exactly what I expected. As if the cars had simply always been there, never moving. I smiled as I entered, knowing there wouldn't be a single space. I got to the end of the first lane and noticed a lady messing around with merchandise in her backseat. I thought it could go one of two ways, she'd either shut the door and walk away or pull out. But there wasn't any indication either way.

Before I rounded the curve to the lane going back, I praised Metross profusely, "O God of the parking spaces, Thou hast shown me grace so many times, words fail me. Except to say, I praise Thee with an unending praise. But, O Lord, I see no human way for me to get a parking space immediately. Now, Metross, show Thy power. I promise I will proclaim You if you open a place for me in the next minute." So I'm coming around with two options, to reenter the first lane or exit the lot. I glanced down the end of the lot and, as if by a miracle, the lady was pulling out. Part of the miracle was this, that no one from the street had entered the first lane and gotten ahead of me! Of course I made a beeline for it and had it, all thanks to blessed Metross.

The name Metross, I heard from other devotees, stems from parking meter, which itself, stems from historical references to Metross in more superstitious societies, societies so superstitious they had to use chariots, the car not yet being invented. Whatever else we might say about the etymology of His name -- which I prefer to think is eternal -- one thing is for sure, it definitely fits. He's all that and more!

I myself have been praising His name and seeking His face for a long time, in fact every time I've needed a parking space in the last couple years. Before that, I guess you might say I felt self-sufficient, that I could go around the block till a place just "naturally" opened up. Which, as you have to know, never happened. I went around so many times I'm still dizzy! But then, like the Prodigal Son and his Prodigal Car, I returned to the faith of my family, and haven't looked back since. I've gotten parking spaces when they've literally not existed just minutes before.

One of the funnest things is to have a non-believer with me, spouting some crap about, "You'll never get a parking space, not now and not in a million years." I'm thinking, I won't even have this car in a million years, so it has to be now. A quick prayer, a little praise, and you know what happens? Like about five places open up. I praise Him, then rub it in to my friend, "Einey meeny miney mo, one space down and four to go!"  LOL!