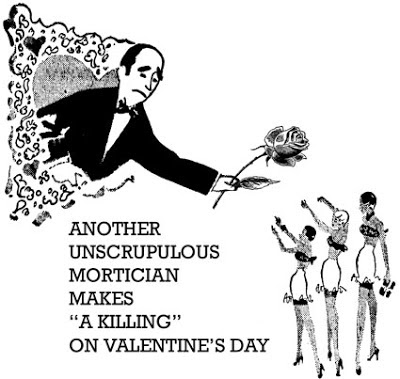 I'm getting the word out there early on something I suspect, way before Valentine's Day, because I'm hoping to get widespread attention on this matter. I'd call it something of a scam. At least that's my suspicion, and I've always had a pretty good success rate in these things. At the very least it should be investigated, and when found to be true, be exposed, shut down, and left dead in its tracks. Prosecute!

My suspicion -- and I'm pretty sure it's more than that, it's something factual -- is that there's a huge racket being run by unscrupulous morticians. The racket goes something like this: Starting around October or November, they start "syphoning off" flowers from their funerals, then keep them in cold storage till just before Valentine's Day. Then they are sold everywhere, like to florists looking for something cheap to help their profit margin.

The big problem as I see it is that those flowers were purchased by well-meaning families and aggrieved loved ones, meant solely to honor the dead. They weren't meant to go from hand to hand, then on some black market, only to end up, maybe purchased by the same people as tokens of love on Valentine's Day! Of course the flowers are the property of the original purchasers, whose intent was that they would make festive a memorial service, then the grave-site.

You know what I should do? I ought to go nosing around a funeral home. I could show up during a funeral, then slip into the back room and watch through the curtains. While everyone else's eyes are bleary from tears, I'm wide-eyed and alert. I can see the flowers, what all there is. Then as the mourners file out, I watch for the morticians to start skimming. Plus, I'm listening. "This flower looks great, this one will fetch a pretty penny, I might keep this one for myself," etc. The wife, normally upstairs doing bookkeeping, is the go-between, helping stash away the flowers before anyone notices.

Or, my other plan might be to show up at a funeral home -- have some business cards printed, "Floral Wholesaler" -- and present myself to the mortician. Naturally, I'm looking to cut a deal. The guy's nervous, he hasn't seen me before. But obviously I know more about the scam than the average guy. And I'm flipping a coin. His denials won't hold up, because I'll keep pressing him, telling him, "You either play ball or they'll be buying flowers for your funeral, and I mean full price!" I honestly can play hardball, especially if my sense of justice is riled up, as it is on this issue.

I love the above graphic. I think it really drives the point home. Look at the expression of professional grief on the schmuck's face. It's Valentine's Day, and he's portrayed handing out flowers to sexy women in their underwear, you'd think he could manage a smile. But no, he's a professional frowner, looking a lot like an underpaid, unappreciated butler, so even naked ladies don't move him. Then we have the women themselves. They're not the least bit suspicious why a frowning mortician would be handing them a flower. They're just gung ho for flowers, they don't care where they come from!

But I care. This is the honest to God truth: In the last year I have personally sent two big floral arrangements to people's funerals. You ever do that? It costs a fortune. I bet they were $60 apiece. The last thing I want is to have these damned morticians -- very unethical -- reselling them on Valentine's Day. To me, that's simply wrong.
Posted by dbkundalini at 4:54 PM