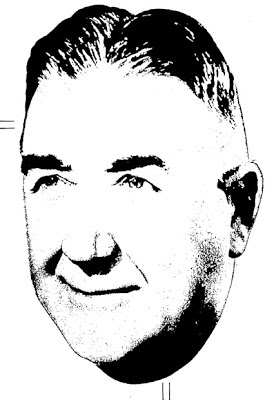 I found this cool graphic of some guy's head while browsing some old newspaper microfilms. Of course I thought, What a great generic guy's head! But then -- and this is the hidden archivist/preservationist in me -- I immediately thought, This was an actual guy, with a history, a family, etc., I better find out more about him. 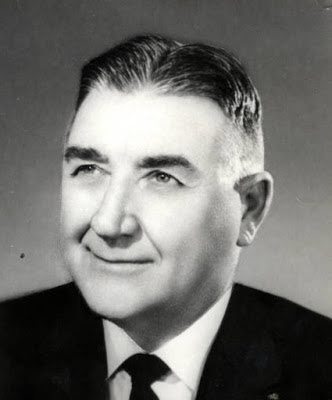 Now, here's a better picture, that I found with a Google search. Resourceful, aren't I? I like this picture, too, which you can get at virtually any size. They have a fairly prominent copyright notice on it, so I hope they'll allow me this "fair use" of his picture, as I'm republishing it as a historical feature with educational commentary. That's a great picture, isn't it? It's pretty easy to imagine him as a major, which he was from 1956-1964 (the newspaper's dates). Wikipedia says his term ended in '63, as does the Indiana Memory Digital Collections, the source for the above photo. 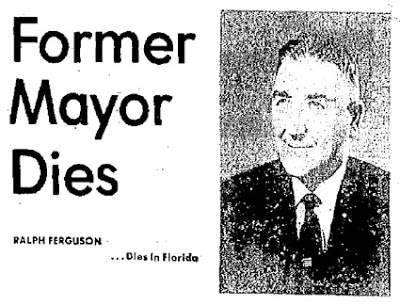 Ralph R. Ferguson was born December 28, 1898. Prior to being Anderson's mayor, he was a state senator and Madison County Clerk. Before politics, he was sales manager of the Central Indiana Gas Company. In the 1920s, he was a licensed real estate broker. In the '30s, he owned and operated the Independent Wholesale Corporation. And in the '40s he owned and operated the Jo Ral Nash Auto Sales firm. So he was terrifically successful, as far as I'm concerned. He definitely did more than I'll ever do, since what have I ever done? I sold used records in the '80s, that's about it. And a few books on eBay. And this blog.

Mr. Ferguson was a good guy in another respect: He was a Democrat. In fact, he was a delegate to the Democratic National Convention on numerous occasions. And if that wasn't enough, he once was president of the Anderson Country Club. Again, speaking of my own personal lack of success, I watch the convention on TV and a few times I drove by a country club.

Mr. Ferguson died on April 1, 1975, if I'm reading this correctly. The paper's a little less than explicit. The publication date was April 2, a Wednesday, and they said he died on Tuesday.

He was successful in numerous other ventures, political successes, etc. Speaking for myself, I do vote and I used to have the stickers to prove it, so I'm a success, too.

Mr. Ferguson's son-in-law*, Robert L. Rock, was also in politics, being the lieutenant governor of Indiana, then he also was mayor of Anderson. So success was passed down, making me wonder about my own forebears, "What happened?" If I were somehow miraculously elected lieutenant governor, I'd show up at the office and go, "What am I supposed to do now?"

UPDATE: The irony of this post, thinking of my own lack of success and the fact that I never heard of Mr. Ferguson until an hour ago, is that before the day is through I'll be one of the primary sources on Google for information about him.

*I changed this from "son" in response to a comment. Thanks.
Posted by dbkundalini at 11:13 AM