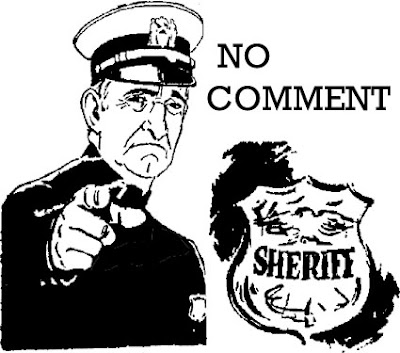 The local TV news urgently cut to the police press conference, about to announce the end of the latest gun-slinging maniac's siege. We see the various detectives, the captain, the sergeant, the FBI chief, and a few underlings bringing in a tray of iced tea.

It's live, and somehow they have all the faith in the world that they're going to get right to the meat of the matter, what happened, how they were able to storm the maniac's compound and finally free his hostage, a five-year-old boy in mortal danger. We've literally been praying that the boy would come out safe and that the maniac would be immediately killed.

Let's get to the press conference, no more delay!

"I'm Police Captain Butch McCall, that's M-little C-big C-a-l-l. This is the FBI chief, [his name spelled]." And so on and so on, right down to the guys with the trays being the comedic Wiere Brothers (W-i-e-r-e), last seen in Elvis' movie Double Trouble, now slopping iced tea everywhere.

"We'd like to thank you for coming out today," he says to the press.

Behind the scenes at the local news, we picture the producer saying, "Cut away! Sum it up, we'll be back when they get past the introductions!"

Then a few minutes later we're back at the press conference. Captain Butch is recognizing the important work of the state police in resolving this matter. "Thank you, gentlemen, for a job well done." This is the state police's cue to step in and thank the local captain and his force, for maintaining their calm in a very tense situation. The captain nods to the FBI chief, who thanks both the state police and the local police for coordinating a great effort in resolving the crisis. Finally, the sheriff moves to the microphone to thank anyone they might've missed. Other than that they will have no comment.

The local news cuts away with the summation, "So there you have it. The police are thanking the police for doing police work."
Posted by dbkundalini at 6:03 PM