Pajamas In Church -- Style Or Sacrilege? 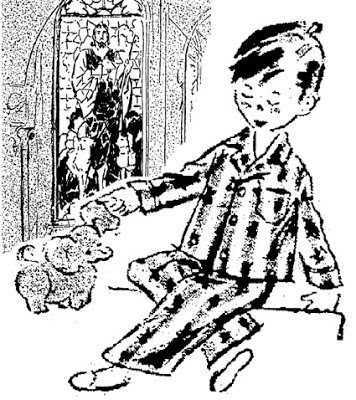 Something happened in church today that for me and others started out terrible, but ended up not so bad. It was one of those moments where you're taken aback, and speaking for myself, even filled with revulsion, but then something extraordinary happens, and next thing you know you're a little more inspired. I'm glad it doesn't happen that often, though, because I'm not sure my poor heart could take it!

Here's what it was. The day started off normal. All the preliminaries. Then Pastor Wadd mounted the pulpit and was into a barn-burner sermon on "Modern Gomorrah Out-Sodoms Sodom." In case you don't know, his ministry specialty is combating sexual addictions. So at this point, as far as we knew, it was nothing out of the ordinary.

Then, without any warning, a couple of people came in the back door, a young man and a young woman, college-aged, and walked down the aisle and lounged right there on the floor of the platform. And if that wasn't bad enough -- the obvious disruption -- they were dressed in pajamas! Of course we know it's not unusual for people to wear pajamas in public today -- it's something of a fashion, a very bad fashion.

So there they were, looking up at the pastor like they were actually interested in his message, trying to suppress a sarcastic smile, according to my interpretation. I felt my blood pressure rise, I was so mad I thought I'd bust a vein. Pastor Wadd looked totally flummoxed, the people around me were aghast, and as for me, as I said, I was seething. My teeth were clenched so tight I might have done actual damage to a couple of molars.

OK, now something else was going on back by the door that I didn't know about. But the events, as reconstructed, went something like this. One of our oldest members -- an old deacon named Guy Miller, Deacon Miller -- was back there pulling off his pants, having worn his pajamas under them ... All I knew at the time was old Guy Miller comes walking down the aisle in his pajamas! And if you know how he walks, it's very slow and labored, one excruciating step after another. It was like the Via Dolorosa.

So there he goes -- Deacon Miller -- with his normal suit coat, and pajama bottoms, painfully walking the aisle toward the platform. The young couple are now also rapt, Pastor Wadd's looking on in slow motion, and the rest of the congregation, including me, have dropped our jaws. Finally, Guy Miller arrives at the platform, and the young college man reaches his hand to help him up the steps. Both of them, him and her, help the old deacon to the floor. We now have quite a scene, you'd have to agree!

Pastor cleared his throat, and looking out over us seemed to grant his seal of approval to the scene, probably thanks to the quick thinking of Deacon Miller, who taught us ... something ... I still haven't figured out exactly what.

My blood pressure dove back to its normal range, but I still don't entirely approve of everything that happened. Plus, I'm wondering why Guy had pajamas on under his pants. Wouldn't they have been riding up his legs?
Posted by dbkundalini at 6:44 PM