Some Proposed Changes For Jeopardy 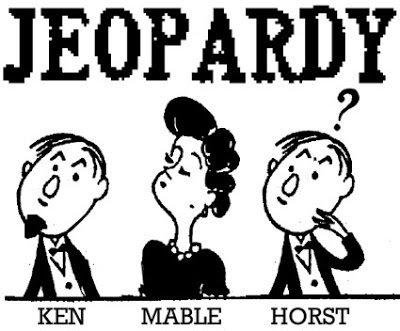 Everyone loves Jeopardy. I've never known anyone -- out of my handful of acquaintances -- who didn't love the quiz show that turns questions and answers on their heads, and pulls out all the stops doing so.

This week it's the Tournament of Champions, which I always like. You get to see contestants who are proven winners, each having won something like a minimum of five shows, go immediately from winner to loser. Because there's only one winner. Even though they're all smart, it's still not like Superman split in three where each is of equal strength and none can win.

One of the weirdest thing about Jeopardy is how every week there's at least one contestant who totally crashes and burns. It's weird because they have to pass a minimum competency test in trivial knowledge to even be on. And yet ... they die on the spot. Frequently, it's a woman who gets the middle spot, but not always.

The current host is Alex Trebek. I heard he signed a three-year contract a couple years ago, and that that will be it, so we're probably getting to the end of his tenure. I actually lose some sleep at night worrying about who they're going to get to replace him. I toss and turn trying to think of who it might be. Then I tell myself two things: 1) The Lord is good, He will provide; and, 2) They replaced Bob Barker and that worked out well. Seriously, Drew Carey is the nicest guy on TV.

Alex has a couple quirks I don't like. One of them he shows when someone gives an answer (question) that's totally off the beam; Alex says, "Oh no..." as though it was obvious and Shame on you. That's rubbing it in a bit much. And two, I can't think of the other quirk. Oh yeah, it has to do with his picture perfect pronunciation of French.

Now, as to the proposed changes, some of these come out of my own Jeopardy play at home. One, I like to bet big on the Daily Double, but I don't like to just bet the money I have. I like to add to it, including pieces of property. It's just for play, and my dog isn't injured in the course of the show, but I take pretend snatches of dog fur to bet. So I might bet everything I have, my Jeopardy money, plus a dollar out of my wallet, my cable remote, plus a snatch of dog fur. Then when I get it right, which has been known to happen, I get it all back double, and the dog's more ready for winter. Or if I get it wrong, I have to reconcile not only with a cold dog but the cable company.

So let's go from there. Say each contestant could bring 10-12 items from home -- valuable and trivial -- to add to their Daily Double wagers. The judges, maybe with an auctioneer as a judge who has lots of experience knowing what things are worth, quickly determine what the items are worth, and that gets added or deducted from the score. So if a guy has a barbecue grill, that could be $40; a bucket of green walnuts, $20; three dead tropical fish, the minimal value of 50 cents; etc. It'd make it fun, like a garage sale, or like Let's Make a Deal. You never know what you might win! A two dollar mule!

I've watched Jeopardy on and off for many years. I remember watching it in the '60s, when I never knew a thing about Shakespeare or Potpourri or Potent Potables. Shakespeare was a total mystery. Now, though, that I've read Romeo and Juliet, although it's been 20 years, I at least have a chance.
Posted by dbkundalini at 11:02 AM