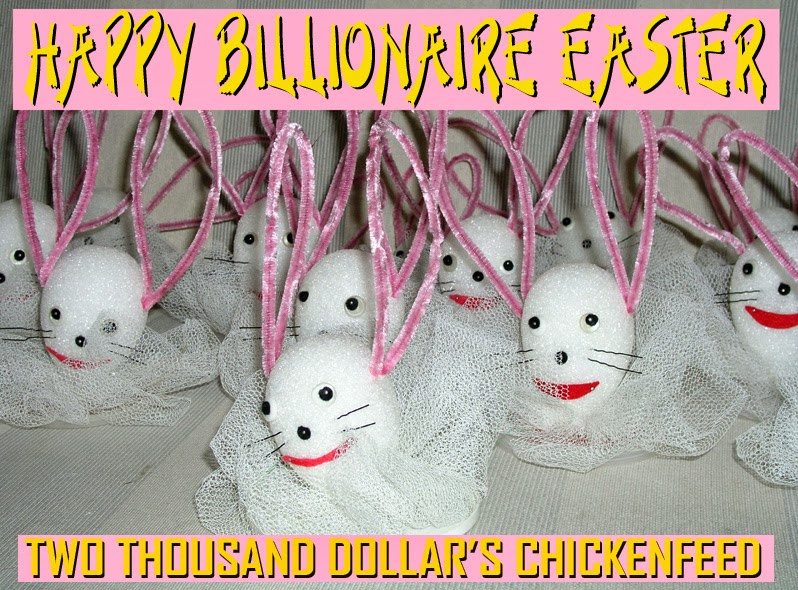 For me, selling Easter bunnies always anticipates the joy of Easter Sunday, but this was an extra special year. Thanks to the billionaire, I sold them all!

As you know by now, I met a man who truly personifies the meaning of the holiday, new life and possibilities, the billionaire. Perhaps he's not the absolute richest man in the world -- that honor would go to someone in oil or defense -- but he's way richer than most. This isn't just funny business, he's literally got billions of dollars, and I know him!

You can't believe how special it was this year, unlike every dreary year in the past, the craft sale ended as soon as it began. The billionaire appeared -- simply appeared, as though brought forth from the light itself -- and bought my whole stock! "Name your price," he said. Now I realize I could've said any number and he would've paid it, but in innocence I said, "Two thousand dollars." Just like that, instead of the usual couple hundred I would've made, and that not all profit, I had $2,000, not to mention the rest of the day off.

Now it's only been a little over a week, but the world has changed so much ... thanks to the billionaire. Where he's not, there are limits. Where he is, those limits are surpassed, to the point that you no longer even consider them. This isn't just some harebrained theory, like the theory of evolution, gravity, or our need for water, this is the central fact of life. The billionaire takes guff from no man; he simply buys them off and watches them dance at his knee. And that's special. With my life now tied in with his, I don't know that there's anything I can't do, high or low. That's what Easter means to me.

Perhaps the craft sale should've gone on a little longer. Let's say I'd sat in the usual doldrums until mid-afternoon. Then perhaps his glorious appearance would've been more revelatory. You know how when you're doing something you absolutely hate? But you have to do it, say, to make a measly couple hundred bucks, not all profit? Because you need that money, because you've got a mouth to feed when you get back home, your own? And if you quit feeding it, eventually it'll be "All Systems Go" for shutting down? That's sort of what happened to my Uncle Clarence... He filled his system with booze and the lady's husband came in and killed him.

So I'm sitting there, and it's high noon, and I'm fanning myself. Customers, customers, everywhere, and not a single one stopping to buy. I'm thinking, 'Life, for everything it's cracked up to be, truly sucks. This is as low as I've ever sunk, wearing my appetites (eating later) on my sleeve in this desperation. Everyone knows what I'm here for, to eat later, excrete waste, and get up and do it all again the next day; don't tell me I don't know what life's all about!' That's when I hear the cry of attendants, "Make way, make way, for the billionaire!"

You think, 'Some crackpot's got a big head!' When in strolls the actual billionaire, relieves me of my burden, granting new life in the form of $2,000, and sets me free. This week -- how can I put it? -- it's been the absolute tops. The billionaire changed my life, and he's truly made me see real life for the first time.

With his billions and my brains, I don't know that there's anything we can't do. Happy Easter, indeed.
Posted by dbkundalini at 8:00 AM