Have You Seen The Pink Professor? 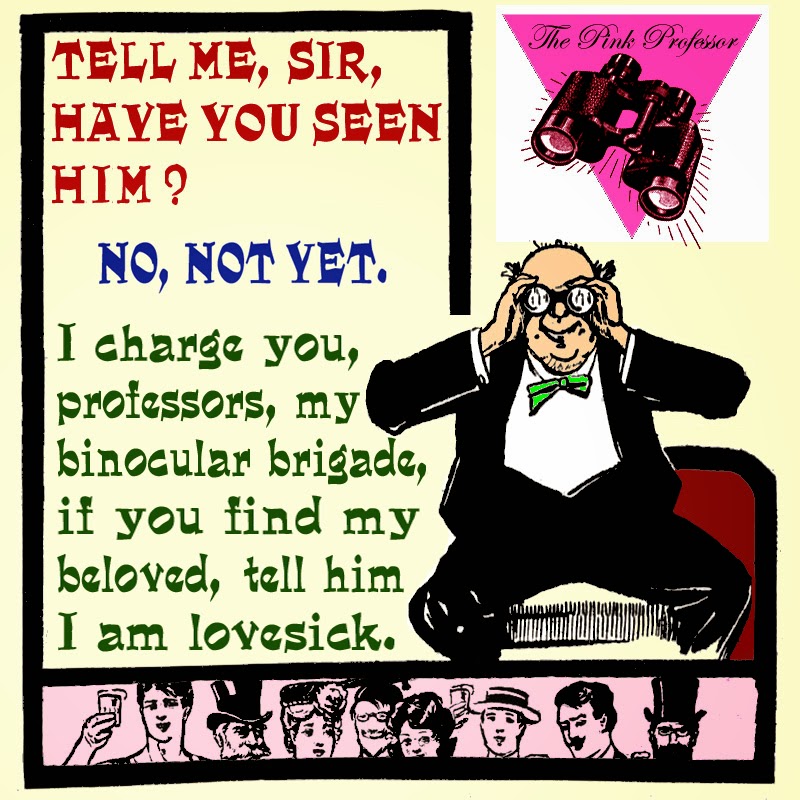 Right on time this morning, my team of university professors arrived and began their work of evaluating the 300,000 books, their task to choose out books I would want. They couldn't wait to dig in, which got my day off to a great start. A literature guy, a religion guy, a philosophy guy, as well as specialists in sociology, general scholarship, and even trivia, got down to brass tacks, a sight to behold.

I milled around the large sorting facility, and in watching them noticed many attractive qualities. Efficiency, confidence, intelligence, and delight for books, to mention a few. So I may as well say, I've always had a thing for professors, whether they wear the traditional mortar board and gown or prefer the more modern, non-scholarly garb. This group was a mix, which to me only attested to their confidence and how comfortable they are in their own skin. That is to say, there wasn't a dogmatic bone in their bodies, no judgment, just the love of teaching, learning, and being helpful.

You might know where this is going... Watching them, and these forces at play, had me, as it were, salivating, being so often provoked as I am in my spirit at the bitterness in our social affairs today. When professors could lead the way to something better. Then there was an additional reason for my salivating, the longing that arose in me for my own prof, The Pink Professor. O God, where can he be! If only money could bring him back, I've got all the money in the world! If I could, I'd apologize a million times, but of course he would silence me well before I could. It's all too much.

We had the most foolish falling out a few years ago and he left town. I say it was foolish, because we should've known better than to argue about "proper ways" of kundalini meditation/lifestyle. Even now I'm kicking myself in the muladhara. I was at a certain level and he was at a certain level -- without explaining the terms, the argument was over philosophies, the "Trash stratum" (Philip K. Dick) vs. "Sahasrara purity." It was quite the dispute, recalling Jesus vs. the Pharisees. Of course I was the complete libertine. I threw a cup of coffee all over his wall and he rolled his eyes at me, illustrating which of us expounded which doctrine. But doctrine be damned!

Later, in subsequent revelations, I realized we were both right (and wrong for insisting on rightness), and that I missed my man. By then it was too late. I sat at the bikers bar, where we met, for three weeks, and slept behind the bar on the floor like a dog, but he never returned. I thought our life had been complete. But it was all broken. If only I could find him. He's gotta be out there somewhere.

Flash! All my life I've had brilliant ideas when pressed. Now I'm a billionaire, they're even more brilliant. I looked up at that team of professors, nearing the end of their book sorting, and decided, These professors are the ones to bring him home! Like attracts like! Who better to track down a prodigal professor than other professors? One professor in hand might be worth two in the bush, but I don't know where--- [lost my train of thought] all that to say, The Pink Professor gets me ... here (chest bump).

I explained the whole situation and offered to finance a sabbatical like they've never known, if they'd only help bring him home. I set out the facts and shared his emblem (his unremitting pink shield) and they immediately knew who I was talking about, The Pink Professor. There were smiles of recognition all around. One of them, in addition to being a scholar in liberal arts, was also a math whiz, as he put 2 + 2 together really fast: "So you and him? Him and you?" I nodded, as if to say, "You got it, Ace."

Binoculars were handed out -- each responsible for his own pair -- and they became my Binocular Brigade. "Your only boundaries, there's no boundaries. Your only mission, to bring him back to me, or good information. Your only rule, Don't fall for him yourself, he's mine." With that, they were off! Leaving me very much alone, to look over the books they had so skillfully separated from the 300,000, and wait.

My Past with The Pink Professor